A man has been filmed verbally and physically abusing a dog, hitting it repeatedly with what looks like a metal food bowl.

The two-minute clip was uploaded to Facebook by animal welfare group Chained Dog Awareness in Singapore (CDAS) yesterday (July 13) and has since gone viral, garnering over 26,000 views, 1,100 shares and 488 comments at the time of writing.

The entire clip was shot in a small brick pet enclosure and on the floor was a red pet bed and a food bowl.

At the start of the video, the man could be heard yelling at the dog, saying, “Welcome to hell, my friend. Four weeks of hell.”

The dog looks like a half-breed or a Singapore Special.

The man then began to threaten the dog, saying: “Tonight you are making only one noise look what is happening to you [sic].”

There seemed to be other people in the room as a child was heard crying in the background.

In the video, the man could be heard hurling Hokkien profanity at the dog and threatening to push what looks like a metal rod into the animal’s face. He also accused the dog of trying to bite him earlier.

He also said, “Xiao Hei will tell you how he is suffering,” with Xiao Hei presumably another dog who had been in the care of this abuser.

He then proceeded to hit this dog with an unfamiliar object, causing it to cringe and growl.

The man responded by saying, “Want to try me? I’ll break another bowl for you to see.”

A CDAS spokesperson told AsiaOne that the Animal and Veterinary Service (AVS) is aware of the matter and has interviewed all parties involved.

CDAS shared that “reliable sources have confirmed that the incident took place at the premises of K9 Connection”, which is a canine school that offers training and boarding services.

AsiaOne has contacted K9 Connection and the company said it “cannot provide comment since [the incident] under investigation”.

We also reached out to Matthew Ng, the executive director of K9 Connection, who referenced the email response provided by the company.

On K9 Connection’s Facebook, the company said its trainers are IAABC and AVS accredited, and that they use a science-based approach when training their dogs.

Many netizens also left angry comments on the page, with some saying the attacker was “disgusting and heartless”. Others also said he was not fit to be a dog trainer.

K9 Connection also has over 200 reviews on Google, with 1.6 out of five stars. However, many negative reviews were released just hours after the music video went viral.

Understandably, many netizens on Facebook were horrified by the video and took to the comments section to express their shock and anger.

Some suggested the abuser may have been doing other things harmful to the dogs when the CCTV camera was off, while another said his heart broke when he saw the dog being hit by the bowl of food.

Some dog owners have come forward to share that they have already sent their pets to K9 Connection.

One expressed shock and said she recognized the green walls, while another mentioned that there had not been a good experience. 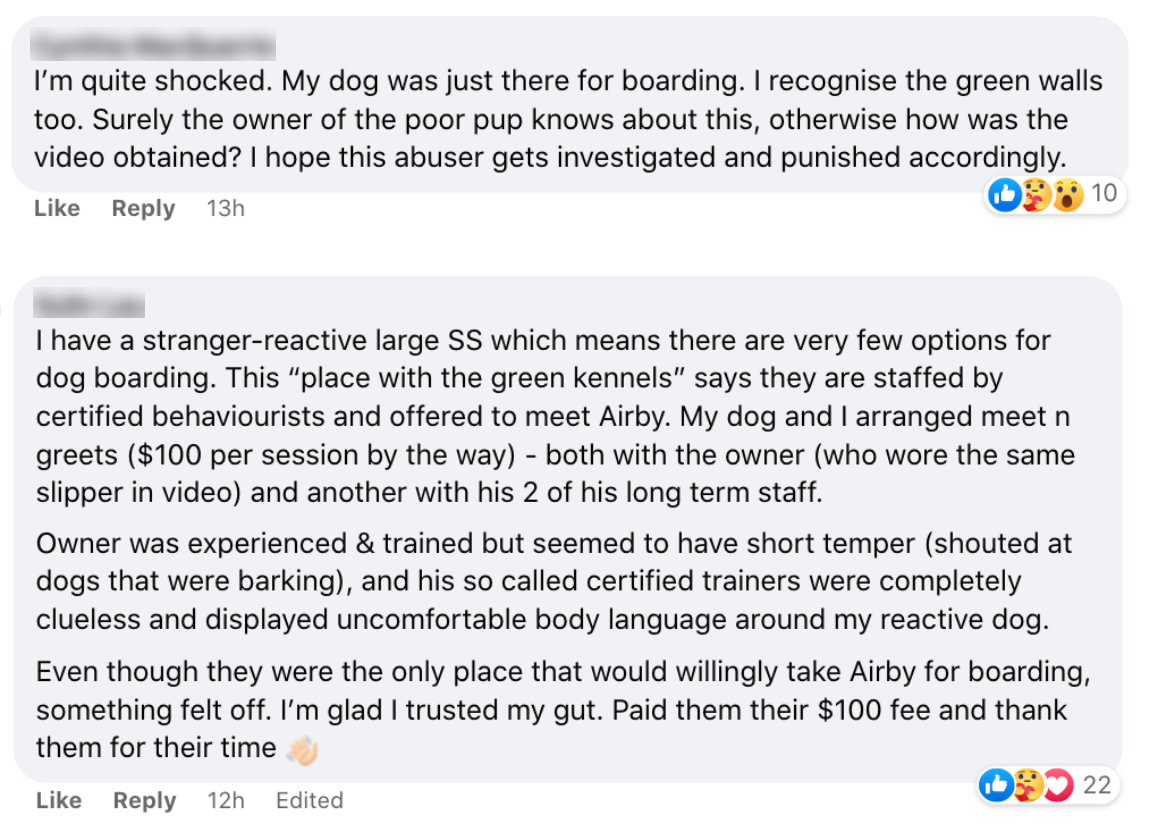 According to information on the AVS website, the number of comments they received regarding animal cruelty and welfare increased from 2,490 to 3,025 cases from 2018 to 2021.

This is not the first time that dogs have been abused in Singapore.

In March last year, AVS investigated a case where a dog trainer was filmed kicking a corgi.

Last October, another man was jailed for eight months after a video of him punching and swinging a poodle went viral.

Dogs aren’t the only animals that have been abused, either. Earlier this year in June, a boy was filmed stepping on two stingrays.