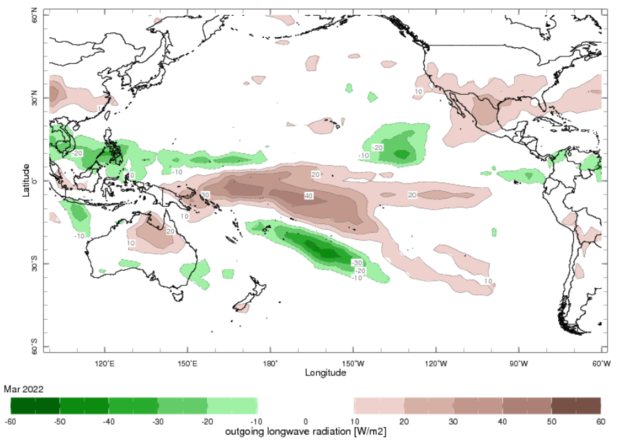 La Niña continues in the tropical Pacific, with the ocean and atmosphere clearly reflecting La Niña conditions. Current forecasts favor the continuation of La Niña throughout the summer (59% chance), with a slightly lower chance in the fall (50-55% chance). A third year of La Niña would be quite unusual – we’ve only seen two more since 1950. I’ll analyze the numbers to see how current conditions add up and what affects the chances of La Niña later this year .

Let’s take stock of the current ENSO (ENSO=El Niño/Southern Oscillation, the entire El Niño/La Niña ocean-atmosphere system) conditions in the tropical Pacific. In March, the sea surface temperature in the key ENSO monitoring region (Niño-3.4) was still well within the La Niña range, about 1.0°C cooler than the long-term average (1991 -2020), based on our most reliable historical record. , ERSSTv5. Remember: the La Niña threshold is a temperature anomaly – a difference from the long-term average – in the Niño-3.4 region of -0.5°C or lower. March 2022 was the 6th most negative March sea surface temperature anomaly at Niño-3.4 since 1950.

As you can see from the graph, March 2022 also tied for the coldest of nine Grade 2 La Niña events on record, for this time of year.

Although ocean surface temperature is a definite indication that La Niña is still strong, it is not unusual for this time of year and does not necessarily tell us much about how long this La Niña will last. Things start to get interesting when we look at the atmosphere, however, providing a bit more insight into why forecasters favor a continuation of La Niña throughout the summer.

Frequent travelers to the ENSO blog know that ENSO is a coupled ocean-atmosphere system. Temperature changes in the tropical Pacific Ocean influence the circulation of the atmosphere (Walker’s circulation); these atmospheric changes in turn affect the temperature of the ocean, and so on. For example, La Niña features cooler than average surface waters in the central and eastern equatorial Pacific and warmer than average surface waters in the far western Pacific. This cold versus warm pattern leads to less rising air and storms over the central Pacific and more over Indonesia, amplifying the normal Walker circulation and driving stronger near-surface winds along the equator – the trade winds. Stronger trade winds further cool the surface and keep even more warm water piled up in the far western Pacific, strengthening La Niña… you know where I’m coming from! For more details, visit Michelle’s post on ENSO mechanics.

Enough preamble – what is Walker traffic doing right now? I thought you would never ask. It really smells like oats these days, as several different atmospheric measurements tell us.

Let’s first talk about the Southern Equatorial Oscillation, an index that measures the relative sea level pressure in the far western Pacific compared to that of the eastern Pacific. When the EQSOI is positive, it indicates lower than average pressure over the west (more rain and cloud) and above average pressure over the east (less rain and cloud). i.e. evidence of a stronger Walker circulation. In March, the EQSOI measured 1.4, the 6th strongest since 1950.

As I mentioned above, stronger trade winds are the key to the La Niña feedback between the ocean and the atmosphere. The trade winds strengthened until March and remain stronger than average until mid-April. You want a number, you say? OK! There is an index that measures near-surface winds in the central Pacific region from 5°N to 5°S, 175°W to 140°W; it was 4.3 meters per second (9.6 miles per hour) faster than average in March. This is the highest March value on record, but there’s a catch: this record only dates back to 1979.

The index that measures outgoing radiation (and therefore cloudiness), the CPOLR, tells us that this March had the fewest clouds of any March recorded over the central Pacific. We are number 1! Again, however, like the winds, this record only dates back to 1979, when the era of satellite measurement began. So, a grain of salt with your records.

There are two main sources of information for ENSO forecasters: current atmospheric and ocean conditions and predictions from computer models. Computer models have a harder time making successful long-term predictions in April, during the spring predictability barrier, although they remain an essential tool. Current model forecasts are mostly split between staying in La Niña or shifting to neutral in the summer. In anticipation of next fall, the North American Multi-Model Ensemble is leaning toward La Niña conditions.

There is a lot of uncertainty in the current forecasts, which is reflected in the probabilities. The chances of La Niña holding for the next few months are quite confident, bolstered by cooler groundwater and the current strong Walker circulation. The chance of a third year La Niña has a slight advantage for the fall, over the chance of neutral conditions. El Niño is unlikely—less than a 10% chance. None of the models predicted El Niño for the fall, and none of those March weather conditions I described earlier were followed by El Niño later in the year. It’s not impossible, nature is full of surprises, but very unlikely.

La Niña influences hurricane season (more storms in the Atlantic, less in the eastern Pacific), is linked to spring tornado activity (complicated links!) and can increase the risk of drought in some areas. Given all of these important relationships, we will be watching the forecast closely and hope to begin breaking out of the spring predictability barrier in the coming months.

Update on progress on Browns homes on Coyote Pass property