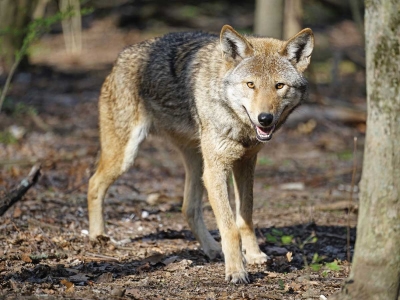 The Red Wolf arrives in Asheville

A 1982 Piper Saratoga plane landed at Asheville Regional Airport on November 20 to deliver an endangered red wolf and take a load of shelter dogs for adoption in the north.

The red wolf, named Ben, was born at the Wolf Conservation Center in South Salem, New York, in 2018 and has spent the last three years living on display with his mother, father and siblings. Now he will be residing at the WNC Nature Center in Asheville, where he will soon meet his new companion and hopefully have a few puppies of his own.

Red wolves are extremely endangered in the wild, with only a dozen left in the small area of ​​eastern North Carolina where they have been reintroduced. However, there are 241 red wolves living under human care in places like the WNC Nature Center, making these facilities an important part of the species’ survival. The WNC Nature Center first exhibited wolves in 1990, and between 1996 and 2014, 13 puppies were born there.

Red wolves Karma and Garnet had resided at the Nature Center since fall 2018, but failed to breed, leading the Zoos and Aquariums Association Species Survival Plan to recommend that a new breeding pair is transferred to the Nature Center. In September, Garnet visited the Endangered Wolf Center in Missouri and Karma will be leaving in the spring. After Ben completes a quarantine period, he and Karma will be placed together for company until a new female is transferred to Asheville.

While there is a long way to go for the species’ ultimate recovery, WNC Nature Center animal curator Erin Oldread is cautiously optimistic about the role of the Nature Center.

“We are proud to be a part of the Species Survival Plan for red wolves,” she said, “and we hope that our new red wolves can successfully breed in the future to have offspring that could potentially be released into the wild and help increase the population.

The plane, piloted by Michael Schneider, founder and executive director of Pilots To The Rescue, did not leave empty-handed. Schneider returned to New Jersey with dogs from Aiken, South Carolina, who were in danger of being euthanized.

The Red Wolf arrives in Asheville