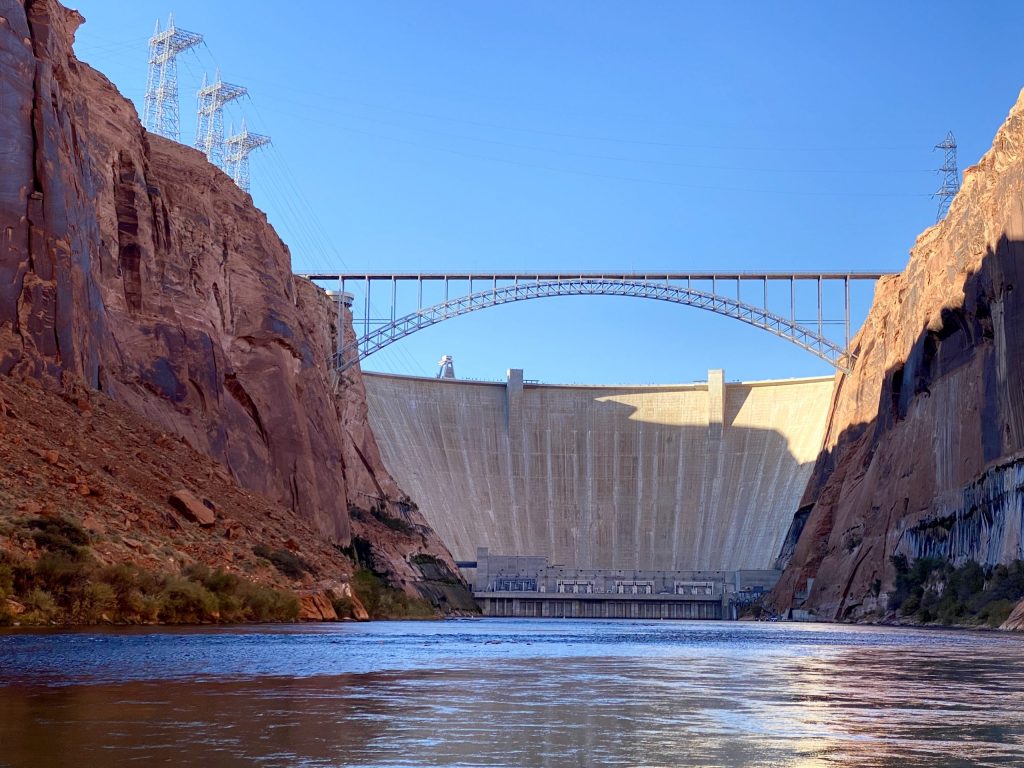 Click on the link to read the article on the Sustainable Waters site (Brian Richter):

Just got back from a glorious 17 day river float in dories through the Grand Canyon. A sublime beauty punctuated by white waters that get your adrenaline pumping.

Most streams running through the Canyon begin at Lee’s Ferry, located fifteen miles below the Glen Canyon Dam. When we arrived at Lee’s Ferry to begin our trip on September 23, I headed straight for the riverside, eager to dip my toes in the water.

Bracing myself for the freezing water, I was amazed when I realized how hot the river had gotten!

The river is – since the construction of the Glen Canyon Dam in 1963 – a freezing current of water released from the deep bowels of Lake Powell’s hypolimnion. For 40 years since the dam was built, the river’s temperature has fluctuated between 47 and 51 degrees Fahrenheit (8-11 degrees C), even in summer when air temperatures at the bottom of the Grand Canyon regularly rise above 100 degrees F.

This icy river water has long posed a serious risk to river runners who become unwitting swimmers when thrown from their river boats into one of the Canyon’s more than 80 great rapids. When a person rolls over from their riverboat, it becomes urgent to get them out quickly, before hypothermia sets in.

But our trip would be very different. When I dipped a toe at Lee’s Ferry in late September, the river was a comfortable 69 degrees! (21C).

Our experienced river guides were quick to explain that due to the enormous shrinkage of Lake Powell (a result of decades of water overuse and climate change), the reservoir has warmed and the water released of the dam is now much warmer…

Lake Powell began to lose its volume of water very rapidly during a series of very dry years from 2001 to 2004. By the fall of 2004, the reservoir had lost nearly two-thirds of its capacity (orange line ). The greatly diminished water mass of Lake Powell began to warm to the highest temperatures recorded since its construction, and water discharges from the dam into the Grand Canyon reached 58 degrees in October 2004, then 60 degrees in 2005.

Lake Powell regained some volume from 2006 to 2018, but a sharp drop since 2018 has caused the river’s temperature to rise again. This year’s high of 69 degrees is a new record in post-dam years. The volume of Lake Powell has shrunk to three-quarters empty.

I was of course very happy to know that hypothermia was going to be much less likely on our trip, and I was also happy to remember that this warmer river is a bit closer in temperature to its more natural state of being. before the dam. The warmer river helped us imagine what wild Colorado would have been like, a feeling that was heightened when we reached the confluences of the tributary Paria and Little Colorado rivers, both swollen by runoff from recent storms that turned the river to a more natural reddish brown. (Viva el Rio Colorado!) instead of its usual blue-green hue.

However, as I would confirm on our return from the river, this warmer Colorado is not good for fishing introduced trout in the river. Trout don’t like hot water because hot water doesn’t contain enough oxygen to feed them. The fishery below Glen Canyon Dam is famous for its abundance of large trout that attract thousands of fly-fishing enthusiasts each year.

You’d think the warmer water in the river would be better for native fish like the endangered humpback chub, but lower reservoir levels are creating a potentially dire situation for this endangered fish.

In recent decades, humpback whales have done well in the Grand Canyon, especially around the confluence with the Little Colorado River, where warmer waters join the main river. Humpback whales have recovered enough to have recently been downgraded from “endangered” to “threatened” status under the US Endangered Species Act. But now they face a strange twist of fate.

Lake Powell is home to a multitude of invasive and introduced fish, such as smallmouth bass which love to eat baby humpback whales. But so far, these predatory lake invaders haven’t been a threat to Grand Canyon humpback whales, as they hang out in the warmer upper layers of the lake, and the dam has been an effective barrier to their escape. .

But as Lake Powell has fallen, the epilimnion warm water layer in Lake Powell has also fallen, and it is now at or near the same level as the hydro outlets of Glen Canyon Dam. This means invasive predators may soon be able to cross the dam’s penstocks in numbers that could put humpback whales in serious danger.

As many readers of this blog know, solutions for water are often elusive and complicated. But many brilliant people are working on these issues every day and I still hold out hope for their success.

My sincere thanks to the amazing team of river guides at OARS who piloted our safe yet adventurous trip. He redoubled our hopes and efforts to keep the river flowing.