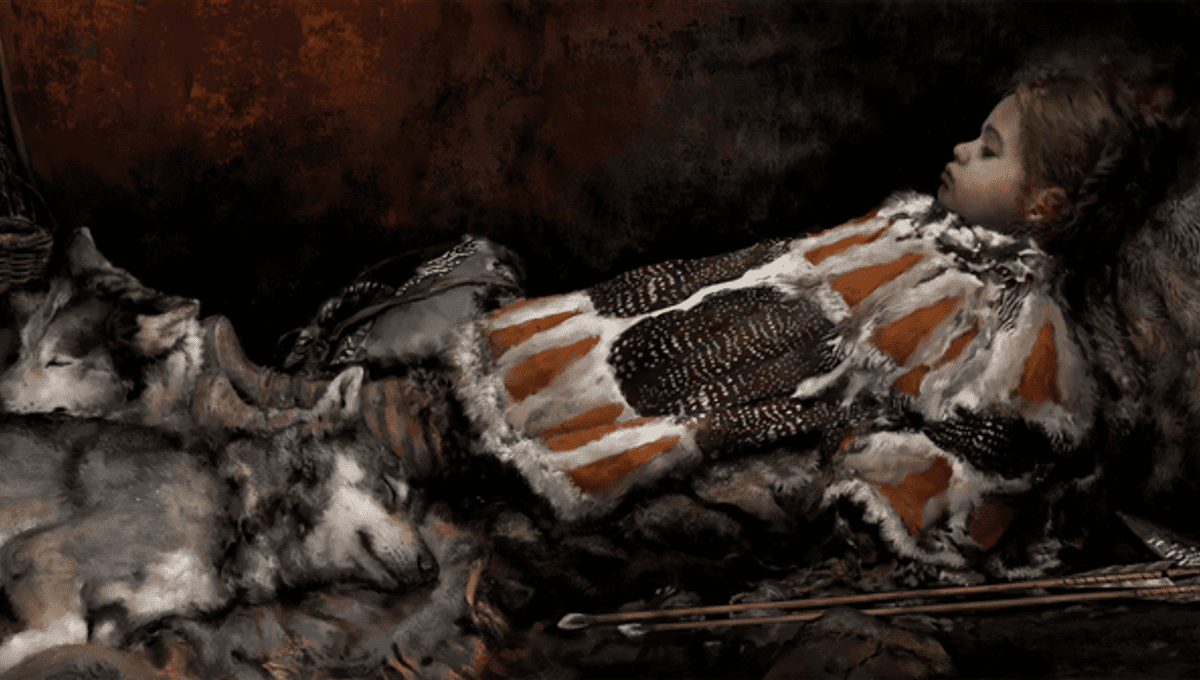 Buried under a gravel road in a Finnish forest, archaeologists have discovered tooth fragments belonging to a child who lived around 6,000 years ago in the Mesolithic period. And although none of the youngster’s bones survived the millennia that followed, a few animal furs and bird feathers have been recovered from the tomb, providing fascinating insight into the burial customs of ancient Norse communities.

Researchers were first alerted to the existence of the tomb after noticing a stain of red ocher on the ground. Commonly found in ancient burial sites and rock art around the world, red ocher is an iron-rich clay soil that has played a role in ceremonial activities throughout human history.

Unfortunately, however, human remains rarely survive long in Finland’s highly acidic soil, which makes it very difficult to study burial deposits. With no hope of finding a skeleton, the team searched the grave for microparticles and were pleasantly surprised at what they found.

Regarding the main inhabitant of the pit, the authors of the study explain that “only a few fragments of unburned human enamel remained from the deceased. According to these teeth, the deceased was a child under 10.5 years old.

And although it was not possible to perform radiocarbon dating on the remaining dentures, researchers were able to hypothesize the age of the tomb based on the stone artifacts that were buried. next to the child. Specifically, they found two quartz arrowheads that corresponded to the Mesolithic material culture.

The burial site, known as Majoonsuo, also contained microscopic fragments of bird feathers. Seven of these feathers were identified as waterfowl down, suggesting the child may have been wearing a down coat or buried on a down bed.

A single falcon feather barb was also recovered, most likely from the empennage attached to the quartz arrowheads. Alternatively, hawk feathers may have been used to decorate the deceased child’s grave or clothing.

Finally, the researchers report the discovery of three canine hairs, without however being able to say whether they come from a dog or a wolf.

“The discovery at Majoonsuo is sensational, although only hair remains from the animal or animals – not even teeth. We don’t even know if it’s a dog or a wolf,” the official said. study author Kristiina Mannermaa in a statement. “Dogs buried with the deceased have been found, for example, at Skateholm, a famous burial site in southern Sweden dating back around 7,000 years.”

However, the fact that no canine teeth were found at Majoonsuo suggests that the child was likely buried with only furs rather than an entire animal. These furs may have been used as clothing or grave goods.

Summarizing the significance of these finds, Mannermaa explained that “all of this gives us very valuable insight into Stone Age burial habits, indicating how people had prepared the child for the journey after death.”

The study was published in the journal PLOS ONE.