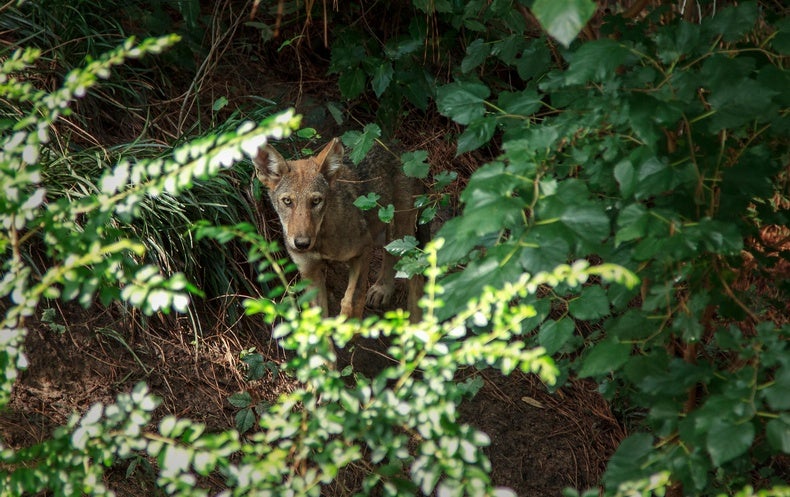 The red wolf once roamed a wide swath of the eastern United States. The historic range of these rust-colored dogs extended from Long Island to Missouri and all the way to the Texas-Mexico border. But in 1972 the population was reduced to range only a small area along the Gulf Coast due to habitat loss and hunting.

To conserve the species, 14 individuals were captured as part of a breeding program. In 1980 their wild relatives were declared extinct – captured wolves were all that remained.

Kristin Brzeski: The species went through this huge bottleneck and lost a lot of genetic variation. And now there’s a lot of inbreeding in the species because you can’t help it when you have so few founders.

Samuel: This is Kristin Brzeski, assistant professor at Michigan Technological Universitywhose research focuses on the conservation of the genetics of wild animal populations.

Alleles are the parts of a chromosome that code for specific genetic traits. Just like humans, dogs inherit an allele from each parent for a certain gene. But why are they called “ghost” alleles?

Bridgett von Holdt: So the ghost part is that the red wolves left, and we assumed they took all their genes with them. But what we also need to remember is that when a population is dying out, it may find that the best mate is the next closest related species. Thus, a red wolf and a coyote can have offspring. Maybe the red wolf dies, because that’s what happened to the red wolves, but all those genes that he just passed on to his coyote hybrid offspring, are now circulating and we’ve rediscovered them.

Samuel: Bridgett vonHoldt, whom you have just heard, is a collaborator of Brzeski. Together, they discovered that some coyote populations in Louisiana and Texas that were protected from hunting still retained huge amounts of red wolf genes – some individuals are nearly 60% red wolves.

As red wolves are released into the wild, breeding with these coyotes could help the critically endangered species regain some of its genetic diversity. It’s almost like stepping back in time and undoing the genetic bottleneck of 1980, making the new red wolf population more genetically diverse.

from Holdt: It would be kind of the opposite direction, taking the small isolated, you know, inbred population from the captive breeding program that still has red wolf genes that are so critical, and putting them in a wild landscape with a new genetic variation that they haven’t seen for 50 years or more. And all of a sudden, hopefully, it’s like a super mix of genetic health and some kind of rebound that these animals can be wild and be their true selves again.

Samuel: Next steps will include how to release red wolves in a way that takes advantage of ghost alleles lurking in coyote populations. As with other wolf release efforts, there may be some pushback.

from Holdt: There will be controversy, there will be people who will not be happy. But there are people who are and are incredibly supportive. And I also think that ultimately there is a philosophy that we created this problem, we are responsible for solving it.

[The above text is a transcript of this podcast.]

Inside Look at Canine Training at Alpena CRTC – WBKB 11