WASHINGTON – The country’s only red wolf population is in alarming free fall, declining 27 percent from 2014 to 2015 to just 50 individuals, according to new population counts released by the US Fish and Wildlife Service. 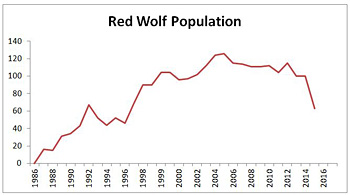 The estimated total population has declined by about 50 percent since 2012, from 100 to 120 individuals to just 50 to 75 in 2015. Declines have occurred since the Service gave in to political pressure from the state of Carolina. North, eliminating the program’s recovery coordinator in 2014 and stopping the introduction of new red wolves to the wild in July 2015. The agency also ended a coyote sterilization program to prevent hybrid animals from damaging the gene pool, dramatically reduced law enforcement investigations into wolf deaths, and stopped reporting on cases where poaching was determined to be the cause of death.

“Director Ashe and the US Fish and Wildlife Service are deliberately dooming the red wolf to extinction,” said Brett Hartl, director of endangered species policy at the Center for Biological Diversity. “The red wolf recovery program was once a shining example of successful conservation. Under Dan Ashe’s leadership, the program was quietly dismantled to appease a few anti-wildlife fanatics. It is shameful.

Releases of red wolves in the Alligator River National Wildlife Area in North Carolina began in the mid-1980s and pushed the population to over 100 wolves by the mid-2000s. The population stopped growing in 2011 when that gunshot mortality increased. Red wolf mortality skyrocketed after North Carolina allowed nighttime coyote hunting, as red wolves and coyotes are almost indistinguishable in the dark. Following a successful lawsuit to stop night hunting, the Fish and Wildlife Service faced increased political pressure to curtail the red wolf recovery program.

“Conservation scientists have shown that red wolf recovery is very achievable and know what action needs to be taken next,” Hartl said. “Rather than follow the science, the Red Wolf program is in disarray because the Service will not resist this political pressure.”

A 2014 report of the independent Wildlife Management Institute concluded that if the red wolf is to recover, two additional populations must be established in the wild and additional resources must be invested to build local support for red wolf recovery.

There is strong local and national support for the red wolves. Recently, 100 citizens who live in North Carolina’s red wolf recovery area sent a petition to the Fish and Wildlife Service expressing their support for keeping endangered red wolves in the wild. In addition, 110,000 people from across the United States, including more than 1,500 residents of North Carolina, have sent letters of support for the Red Wolf Program.

The Center for Biological Diversity is a national non-profit conservation organization with more than 990,000 members and online activists dedicated to the protection of endangered species and wild places.

Undermining the recovery of the red wolf in North Carolina