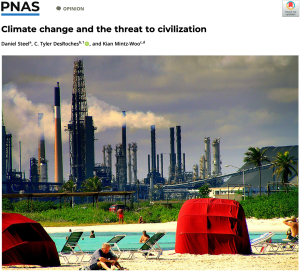 Opinion: #ClimateChange and the threat to civilization – PNAS

Click the link to read the opinion piece on the PNAS website (Daniel Steel, C. Tyler DesRoches and Kian Mintz-Woo). Here is an exerpt :

In a speech on climate change on April 4 this year, UN Secretary-General António Guterres blasted “the empty promises that put us on the path to an unlivable world” and warned that “we are on the fast track to climate catastrophe”. Although striking, Guterres’ statements were not new. Guterres has made similar remarks on previous occasions, as have other public figures, including Sir David Attenborough, who warned in 2018 that inaction on climate change could lead to “the collapse of our civilisations”. In their paper, “World Scientists’ Warning of a Climate Emergency 2021” – which now has more than 14,700 signatories from 158 countries – William J. Ripple and his colleagues state that climate change could “cause significant disruption to ecosystems, society and economies, potentially rendering large areas of the Earth uninhabitable”.

Because civilization cannot exist in unlivable or uninhabitable places, all of the above warnings can be understood to assert the potential for anthropogenic climate change to cause civilizational collapse (or “climate collapse”) in a more or less to a greater extent. Yet, despite the discussion of numerous negative impacts, the scientific climate literature, as synthesized for example by the assessment reports of the Intergovernmental Panel on Climate Change (IPCC), has little to say about whether or under what conditions climate change could threaten civilization. Although there is a body of scientific research on historical and archaeological cases of collapse, discussions of the mechanisms by which climate change could cause the collapse of current civilizations have mainly been the domain of journalists, philosophers, novelists and filmmakers. We think that should change.

Here, we call for addressing the mechanisms and uncertainties associated with climate collapse as a critically important topic for scientific research. Doing so requires clarifying what “civilization collapse” means and how it relates to topics in climate science, such as increased risks of fast- and slow-onset extreme weather events. This kind of information, we believe, is crucial for the public and for policy makers, for whom climate breakdown can be a serious concern. Our analysis is based on the latest research, including Kemp et al.‘s PNAS Perspective, which drew attention to the importance of scientifically exploring the ways in which climate outcomes can impact complex socio-economic systems. We go further by providing more detail on the collapse of society, for example, distinguishing between three increasingly serious scenarios. Additionally, we emphasize avoiding catastrophic biases and recommend studying the mechanisms of collapse in conjunction with successful adaptation and resilience, seeing them as two sides of the same coin.