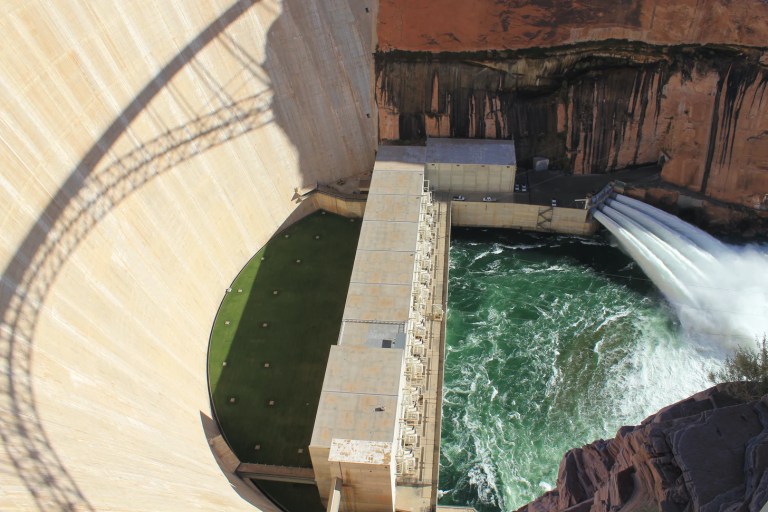 If you read my impressions of a visit to the Hoover Dam, you will recall that I ended it with these sentences describing the spillway at the dam (not the dam itself): “It’s beautiful as the functional structures. And yet it no longer serves any real function – and never will – except, perhaps, as a reminder of what was.

When venerable LA Times environmental reporter Sammy Roth tweeted the description, it was one of the responses:

Ok, well, I don’t know how “arrogant” it is to say that a spillway will never be used again, but a later discussion on Twitter fleshed out the bigger point he was trying to make : Just as climate change can exacerbate drought, warming can also trigger extremely heavy rainfall, leading to catastrophic floods à la 1983., which could refill the reservoirs and bring the spillways back into service. Others also chimed in, pointing to Lake Oroville in California, which went from nearly empty to overflowing and back to empty again over the course of several years.

It made me think that maybe I had been too reckless in saying weirs would never be needed again. After all, anything is possible: we know that the 1911 flood sent about 300,000 cubic feet per second or more past the current Glen Canyon Dam site (compared to 1983 flows of 120,000 cfs), and paleoflood surveys suggest that deluges in the distant past exceeded above 600,000 cfs – some sort of biblical event.

The issue here is one of scale. Both Lake Powell and Lake Mead are gargantuan in size. Powell is 186 miles long when full with over 1,900 miles of coastline. It can store nearly 27 million acre-feet (af) of water (minus a million or two due to siltation). Compare that to Lake Oroville, with its relatively tiny capacity of 3.5 million acres.

Powell currently has less than 6 million acre-feet, leaving 20 million acre-feet of empty storage that must be filled before water reaches the spillways. The Lake Mead numbers are just as huge.

Now the monster 650,000 cfs flood would dump 1.3 million acre-feet of water per day into the reservoir. So you would need two weeks to fill Powell – and Lake Mead would still have 20 million acres of unused capacity, which means you would need another two weeks of flooding to fill it. Megafloods don’t usually last that long – the 1911 flood caused river levels to rise for days, not weeks (and Colorado River flows throughout the year were unremarkable). And in addition, 650,000 cfs will not sneak up on dam operators. They would see it coming and start releasing water from the reservoirs ahead of time, avoiding having to use the spillways.

Conclusion: A sudden mega-flood will not overflow either Mead or Powell, and certainly not both.

But what about a series of really wet years, when record snowfalls are followed by torrential rains in the summer? We know it’s possible, because that’s exactly what happened from 1983 to 1986, the last time the weirs were used. We also know from 8th century streamflow reconstructions that the wet and wild 1980s were not entirely unprecedented. They were, however, an anomaly, and they are among the wettest four consecutive years on record.

So let’s assume a repetition. Would this fill the dams to overflow and bring the spillways back into service? May be.

Here are the numbers as of March 30:

These were the actual inflows into Lake Powell during the super-soak years of 1983 through 1986, also known as the only time the spillways at Glen Canyon and Hoover Dams were actually used. It didn’t go over very well, but we’ll get to that in a minute.

To put this into context, consider the inflows over the four largest hydrographic years of the past two decades:

And, just to give you an idea of ​​the sorry state of the Colorado River right now:

Glen Canyon Dam operators are required to send at least 8.23 ​​MAF down Lake Mead each year, but generally only exceed this level when Powell is near full and “equalization” kicks in. It It’s basically a “fill Powell first” philosophy. The following Glen Canyon build numbers are guesses based on this. Of course, once Lake Powell is full, discharges would equal inflows.

The equation is then:

Thus, at the end of an almost unprecedented series of wet years, Lake Powell would be full, but Lake Mead would still need 6 million acres of water before the spillways could be used.

Let’s just say I feel better about my “never again” comment on the spillway.

There is another possible scenario: four years of giant snow/water years followed by a monstrous mega-flood – the double whammy. This would certainly fill both Powell and Mead and could lead to a 1983 situation again, or worse.

But this does not necessarily mean that the weirs would be used again. In fact, dam operators will go out of their way to avoid it because they really aren’t meant to be used. In 1983, it was not the high water that forced the use of the spillways, it was the inability of the dam operators to prepare for sudden runoff by releasing enough water in advance. And it stemmed from faulty weather forecasts.

When the runoff reached the already full reservoir, the water spilled into the spillways, which are actually tunnels through the cliffs on either side of the dam. A phenomenon called cavitation has occurred, in which bubbles of vapor in the water collapse, sending shock waves through the tunnels. This carved huge gashes into the concrete revetment and then into the rock, which in turn threatened the dam itself. Plywood extensions were added to the top of the Glen Canyon Dam spillway gates to keep water out.

So even in the extraordinarily unlikely event of a double whammy for the 1983 hydrological year + a mega-flood, dam operators will be ready to deal with it. So, I stand by my assertion, as rash as it may be: the spillways at Glen Canyon and the Hoover Dams are obsolete, except perhaps as extreme skateboarding drops.

In a similar vein, the Energy Information Administration has released figures on the effects of last year’s drought on hydropower generation.. As expected, it was rather bleak, with California facilities producing only about half of what they normally would.

But it’s okay, right? I mean, that was last year and now the drought is over, so…huh? What is that? Oh. Oh dear. It just happened: snow levels in the Sierras are between 30% and 44% of the average for this date. Unless the storms are fast and heavy, it will be another year of reduced hydropower in the Golden State. Not good.

We’ve promised to do various Colorado River Compact-related coverage this year, so here’s some pretty fascinating information I found in a 1916 USGS article on the Colorado River. On the left are population figures for the major cities in the Colorado Basin and the portion of states located within the basin. On the right are the annual flows of the Colorado River above its confluence with the Gila. It turns out that the average for this period was a little higher than the historical average, which led the Compact negotiators to allocate more water than actually existed in the river. Whoops !

Protect the coyote while it raises its young