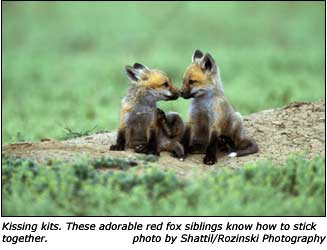 Meet the Fox: A Small Omnivorous Canid and Our Wild Neighbor (November 2008)

Meet the fox: a small omnivorous canine and our wild neighbor

There are 27 species of foxes in the world, including 4 species of fox in the state of Colorado. The gray fox (Urocyon cinereoargenteus) is found in canyons and along state foothills. The little swift fox (Vulpes velox) is confined to the eastern plains of Colorado and its close relative, the dwarf fox (Vulpes macrotis), live in the semi-desert shrub lands stretching from Montrose to Grand Junction.

Here in Crestone, usually only the red fox (vulpes vulpes) is found, with 35 to 50 of them living in our region. The red fox also lives statewide and they are the most common foxes in the world, found on almost every continent.

Foxes are generally smaller than other members of the canine family, such as wolves, jackals, and domestic dogs. Red and Gray Foxes are 3ft long and weigh 9-11 pounds. Swift and dwarf foxes are only 27 to 36 inches long; their tail is as long as their body. They weigh 4 to 7 pounds. On average, male foxes (dogs) weigh about a pound more than female foxes (vixens).

Most foxes only live 2 to 3 years, but they can survive for up to about 10 years in captivity. Unlike most other canines, foxes are not generally pack animals; they are generally solitary. Foxes have a highly developed sense of smell, excellent hearing and good vision. They can run at a speed of 30 mph and are good swimmers.

Foxes are opportunistic eaters who hunt for living prey. They eat rodents, grasshoppers, birds (especially chickens), as well as various fruits and berries. Foxes are known to hide their food, burying the excess for later consumption. Unlike our local coyotes, foxes aren’t as likely to pick up your pet cat, but if they’re hungry enough, they might. Like many of our other local wildlife, if you’re not careful you’ll attract foxes to your home. Garbage that is not stored safely is an easy meal for these scavengers.

All Colorado foxes produce a single litter of young per year. Gestation periods vary from 7 to 8 weeks with litters of around four weeks on average. A typical home range for a red fox is five to ten square miles. Males travel farther than females, but juveniles that move away from their parents often travel the farthest. Adult red foxes will usually stay within a mile of their den while raising young.

The red fox is active day and night, but most often at dawn and dusk. They are very noisy, especially during the breeding season. The most commonly misinterpreted sounds they make are howls that can sound like a house cat fight. Barking and yapping are also common. Although the fox howls, the sound is quite different from the howl of the coyote. Chances are, you’ve heard their howl and mistaken it for a funny-sounding dog.

Foxes are extremely suspicious of humans and cannot be kept as pets. However, they adapt quite well to human presence. If a red fox is acting aggressively, it could be a sign that it is sick. Any red fox that appears to be ill or is acting aggressively should be reported to our local Wildlife Division office. Landowners who wish to shoot red fox should be aware of local and state laws. Hunting red foxes on public lands requires a Colorado small game license.

Editor’s Note: Red fox families live in the town of Crestone and the Baca, often near homes. Be aware of our furry little neighbors and help protect their habitat. Young kittens are particularly vulnerable and roaming dogs pose a danger to their safety.