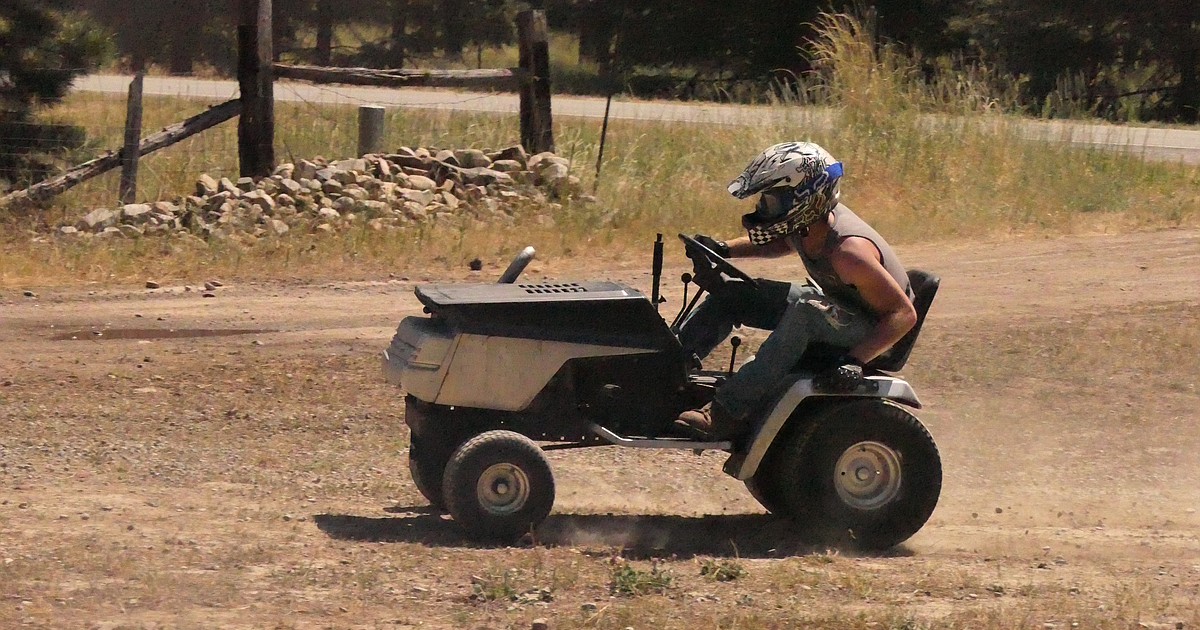 Corey Frank had already wrapped it up. He had successfully won his time trials and heats, and was in fact the lawn mower champion of the day.

The Wild Coyote Bar Days title was his after guiding his “stock” lawn mower around the dusty, sunny oval that was the race course long before the other seven challengers.

The final run around the makeshift dirt oval across from the legendary bar eight miles southwest of Thompson Falls was shaping up to be nothing short of fun for the fans. A chance for the approximately 100 spectators, who were mostly gathered in the shade of a few towering pines, to see all the riders do 15 laps at the same time around the approximately quarter-mile track.

In the opening laps of the Grand Final, he was neck and neck, back and forth with another driver until near disaster struck.

Roaring and slippery in the first corner of the opening laps, the two leaders slammed their wheels, sending Frank’s lawnmower off the track and into a shallow pit flanked by a fence.

The crowd of beer-laden spectators fell silent momentarily as Frank and the mower disappeared in a thick cloud of dust as temperatures approached the century.

The smell of burning rubber, which turned out to be from a belt from Frank’s mower that had overheated in the collision, filled the air.

As the dust settled, the new lead driver “mowed”, slowed only by the trauma of the moment and a yellow warning flag waved by race organizer Brad McQuigan. Much to the relief of the festive crowd of fans, Frank emerged from the cloud, a little shaken but otherwise fine.

Like any good runner, Frank immediately began trying to assess and restart his injured run. He eventually started while other riders were held up behind a “red” flag, but the mower he had ridden so successfully all day was clearly limping more than the driver.

“We just hit some tires and got a little tangled in the corner,” Frank said after the collision. “I’m fine but the mower wasn’t racable”.

As McQuigan lined up the mowers for a restart, Frank got back in line on a borrowed mower and finished the race, albeit at a much slower pace on a slower mower. Not long before, Frank blew away all the challengers with his sideways leaning style as he raced around the four corners of the track, much like a speed skater leans when taking turns on the rink.

“I rely on the corners, it helps not to slow down too much,” he said after easily winning the races he was in before the big crash. “It’s so much fun, I’ve been doing it for a few years now and I love doing it.”

Frank said Saturday’s race was for purely stock, unmodified engines rated between 20 and 27 horsepower. No one, including McQuigan, knew exactly how long the course was. The machines, he said, can reach speeds of up to 35 miles per hour.

“We don’t really worry about that,” McQuigan said. “We just set up a course and let them go.”

Lawn mower racing was one of the big attractions at the Wild Coyote‘s annual summer celebration. Rubber duck “races” were also included in which participants wrote their name on small rubber ducks which were then released into a nearby stream, with the winner being the owner of the first duck to cross the finish line.

Bands, beers and good times were clearly the theme of the day.

For fans, the race was a welcome relief from the scorching sun as most huddled in the shade of the pine trees. Among those was Plains-area resident Dennis Osburn, who watched the show from the inside circle of the track.

“I’ve never been able to mow my lawn so fast,” he joked. “I’m surprised how fast they can go.”

If the goal was to have fun in the woods, mission accomplished.