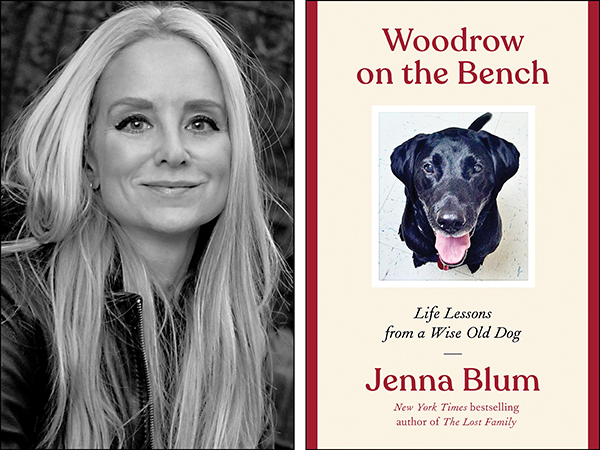 Jenna Blum gets candid through her doggy in her new memoir

Jenna Blum excitedly grabs her laptop and tilts it to her window. She narrows her eyes at the screen, gazing past the cherry blossoms that have reached their full bloom, and points the camera at a bench in the distance. When she turns around, there is a brief flash of awareness, as she realizes that she doesn’t really need to act as a guide.

The first lines of his first memoir, Woodrow on the bench (Harper, Oct), offer the exact location of the bench: in front of his apartment in Boston’s Back Bay, on a green lane, nestled between old oaks and poplars. Twice a day, every day, until his last day, Blum’s black lab, Woodrow, pulled its owner to his favorite place: his bench. He was rapidly weakening from age and congestive heart failure, and that bench was both as far as he could go and as far as he wanted to go. Quickly, it became more than a few wooden planks tied together with iron; it was also Blum’s beloved space.

“What’s weird about this – and I realized it right now – is that I usually write fiction, so I can’t really take people to the settings I’m writing about.” Blum says. “Or, I can, but it’s only research. Now it’s like, ‘Oh my God, this is my life.’ “

Blum wrote for most of her 51 years (she won Seventeen‘s National Fiction Contest when she was 16), but this is her first foray into non-fiction, and the idea that places and people in the book exist outside of her mind seems to strike her. At one point, as she explains one of the lessons she learned from writing the memoir, she stops to note, “It’s weird doing the story behind the story, because you already know the story behind the story. “

Blum is perhaps best known for her 2004 historical novel, Those who save us, who spent over a year on the New York Times bestseller list and talks about a mother and daughter released from Buchenwald. Blum wrote two more novels, Storm chasers and The lost family), and is a champion of other writers, teaching novel and marketing workshops for Grub Street Writers, where she has taught for over two decades. During the pandemic, she co-founded social media promotion group A Mighty Blaze with fellow author Caroline Leavitt, to help writers whose book tour was canceled.

Highlighting a shared experience and building relationships has been a driving force for Blum in the writing. Woodrow on the bench; the memoirs center on the life and death of a dog and also deal with the universal pain of loss and grief, and the power of community to help us endure this struggle. Just over a year before Woodrow’s death, Blum’s mother died of breast cancer. While sailing in the aftermath of her death, Blum also took into account the impending impact of losing Woodrow. Through the beginnings and ends of relationships, and Blum’s decision not to have children, Woodrow has always been there. What would life be like when, one day, he is no longer there?

This notion, that Blum’s entire emotional life was tied to an animal she knew would survive, runs through the book. Instead of crippling her in inaction, Woodrow’s fate became a catalyst, allowing her, after a lifetime of self-reliance, to finally let people in.

Although Blum wrote about how people deal with trauma in his novels, writing about his own experience and making himself the central character was something new. It wasn’t so much the storytelling that was difficult. “Telling this story as honestly and accurately as possible, and leaving the boring stuff aside,” was easy, she says. “What was difficult was the vulnerability. When you write fiction, it’s all about cover-up. You write about your emotions, but you disguise them in someone else’s stories. The emotions are all real, but the story is made up, so it’s like hiding your underwear. With the memories, it is rather “A boxer shorts!” Look, folks, here are my underwear! And that’s grandma’s underwear! I wear it too! Are you not feeling better? It’s a bit like writing a dissertation.

Where Blum is most visibly successful is in bringing a blend of heart, lightness, and empathy to a story that we know from the start will end with deep sadness. The idea that a memoir should make her readers feel a little less alone in their own struggles is, she says, what ultimately prompted her to dig deeper than the rescue dog trope.

Blum takes issue with how his parents equate asking for help with weakness and delves into how adults find it hard to ask for help even when it’s needed. She explores the incredible power of community as she paints loving portraits of the friends and strangers who helped her take Woodrow through the busy streets as her legs began to fail, brought her food when Woodrow was too sick to be left alone and ultimately surrounded her with 24 hour care after Woodrow’s death. By exploring the relationship between the death of her mother and that of her dog, she illustrates how devastating loss is in all its forms.

It was this ability to make a book about a dog into something that would resonate with any reader that turned Blum editor-in-chief Sara Nelson at Harper on. Nelson had worked with Blum on The lost family, another historical novel set during WWII, and describes himself as a “mid-level dog person.” That she didn’t particularly care about dogs but fell in love with the book, she explains, said a lot. She knew that Blum’s voice and his mastery of character development would make the book appealing to readers no matter what they thought of dogs.

When Blum sat down to write Woodrow on the bench, she didn’t intend it to be so personal. “The book started out as a love note to Woodrow, as a memorial to him,” she says. “And also at the bench – the amazing nature of being in one place and learning that all you have to do to be part of the community is present yourself in a consistent way.”

Woodrow on the bench evolved, however, and quickly became a love letter to everyone Blum was connected with through Woodrow – or as she puts it, “every person who stopped by that bench.” It didn’t matter if it was everyday, like dog moms, or a stranger who showed up once and sat down and told me a story.

Alyssa Ages is a journalist in Toronto. His next book, The secrets of the giants (Avery), concerns the impact of physical force on life.

A version of this article appeared in the 02/08/2021 issue of Editors Weekly under the title: Dog Years

Archeology: the jawbone of a huge dog from 1.8 MILLION years ago with human remains in Georgia

Snowball, Avalanche, or Debt Consolidation – Which Is Better For Debt Elimination