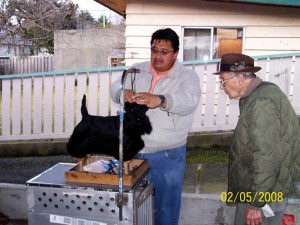 From the CC Vault: One Man’s Opinion

This article contains thirteen questions posed to three men who took the same dog to the Westminster Kennel Club Show three times and ultimately won Best In Show for the third time with that dog. They are Mr. FJ Bob Bartos, Jr. (BB) with the dog Scottie, Ch. Bardene Bingo in 1967, Mr. Richard Chashoudian (RC) with the dog Lakeland, Ch. Jo Ni’s Red Baron of Crofton in 1976, and Mr. Gabriel Rangel (GR) with the Scottie hen, Ch. Roundtown Mercedes of Maryscot in 2010.

1) At that moment, when the judge pointed the finger at you, how did you feel?

BB: I felt numb and was surprised.

CR: I felt like there was a monkey on my back. I finally felt that I had won this dog show.

RG: I wanted to cry with joy.

2) Why did you bring this dog back three times?

CR: The dog I brought back to the Garden three times was a red Lakeland Terrier named Ch. Jo Ni’s Red Baron of Crofton – call name Baron. I had great confidence in this dog as I thought he was one of the best two dogs I have ever shown. The other dog was Ch. Melbee’s chances are, the Kerry Blue Terrier. When I first took him he was best of breed. The second time I took him I was beaten in the breed by a dog that was not of the same caliber as the one shown by George Ward. I brought it back the third time which was the hundredth anniversary of the Westminster KC show. He won the race and the group under Anne Clark who I knew were big Baron fans. It was a very good group with one of the best judges ever. The Best In Show judge was William Brainard, Jr., whom I only met once. People who knew him said he was a very direct shooter.

RG: The first time, Sadie acted with all the lights, noise and other distractions. The second time she won the Terrier group and we had to try again. The third time, Sadie was at her peak. She was having a great year.

3) After all the excitement was over, the parties and all the things that come with winning Best In Show at the Garden, did you feel like you had accomplished all there was to it?

BB: Not really. There are many more dogs to show and many good ones yet to come.

CR: There was a big disappointment after winning the Garden because I wanted to do it so badly. I spoke to Anne Clark about the disappointment. She told me that you always have to have a replacement for the dog you win with. There was no sympathy for my feelings.

RG: I was very excited to accomplish this as a manager. The Westminster Kennel Club Show has been in existence for one hundred and thirty-four years and I am honored to have been one of the winners of this prestigious competition.

4) Were you looking forward to finding another dog to start over?

BB: Yes. I will always look for another quality dog. I was very lucky to always have, every ten years or so, a good show and a stallion on my way.

CR: I realized I had to find a new campaign dog because I wasn’t ready to retire. This dog was a Smooth Fox Terrier, Ch. Tarb le Bratt.

RG: I would look forward to finding another dog to try doing it again. If the opportunity arises, I will be ready.

5) Was this the most important win for you in your career up to that point?

BB: Yes, it was because the garden is the epitome of a win as a professional manager. A very special win for me was Best In Show in 1965 in Beverly Hills. One of my most exciting and emotional wins was Best In Show at Santa Barbara in 1966.

6) Was winning Best In Show at Westminster something you thought you had to do?

BB: It is every trainer’s goal to win Best In Show at Westminster at least once. I was no different.

CR: Yes it was. Because at the time, it was the show to be won. I had tried so hard to win it with several good dogs.

RG: No. I didn’t feel obligated to win Best In Show at Westminster. I would always try every time I go. I never felt or had any idea that I would win. 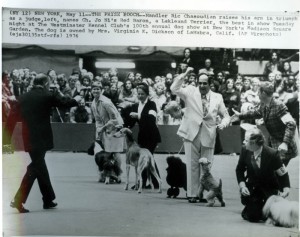 7) Why do you think this dog caught the judge’s attention that night?

BB: Like any large dog or person when they enter a ring or room, their presence demands your attention. Apparently that night Bingo was that dog. He was at his best that night.

CR: Red Baron was a difficult dog to understand. He sometimes growled at the judges. He growled at Anne Clark. She just turned to the dog and said, “Awe, shut up!” and she took him in. He growled at Lang Skarda six times and Lang gave him six Best In Shows. He had never given a dog six Best In Shows. He growled at Major Godsol and he grabbed his muzzle and squeezed him until he cried. He no longer had a problem with him. I was very nervous about how he would react to Mr. Brainard judging Best In Show. However, on the table during the examination, he agreed with him. Back and forth, Mr. Brainard wanted the dog to come back and stand on its own. Baron was a crowd favorite that night and there was a lot of noise as he walked up and down. I noticed that Mr. Brainard, when he was stopping the dogs, he would bend over at each exhibit and put his hand on the dogs head and take another look. It was the most nervous moment of the show for me but Baron didn’t let me down. He stood there like a gentleman and never growled.

RG: Because I never touched the dog, I never interfered with his demonstration. Sadie did it all on her own. She showed up because she was happy.

CR: I was able to sleep the night before. I went to bed early. I didn’t go to any parties and didn’t drink. I wanted to have a totally clear head in the morning. The next day I went to dinner at Sardi’s. George Ward and Bob Bartos were there and they were very happy for me. I walked across the street from the garden to the bar at the Hotel Pennsylvania and there was a group of people I knew very well and they all said “Hip, Hip, Hooray” three times. I think the leader was Bobby Fisher. I will never forget that.

RG: I didn’t sleep at night either. I was in bed but not sleeping.

9) How did you feel entering the Best In Show ring that night?

BB: I felt confident and I had faith in the dog. I also had confidence in Percy Roberts’ ability to judge. However, with a Scottie you never know.

CR: I was worried about how Baron would react to Best In Show judge Mr. Brainard.

RG: I thought winning the race and the group was a really good thing. Sadie and I were having fun. We were both happy and relaxed when we entered the Best In Show ring.

10) When did you know that this dog was capable of winning Best In Show at Westminster?

BB: Day one it came out of the crate after being shipped to me from England. I never asked to buy Bingo. It was offered to me.

CR: I knew Baron was going to be a really, really good show dog from the first time I laid eyes on him at around seven months old. I had won 75 Best In Shows before Westminster so I knew what kind of dog he was. The big problem was his growl at the judges.

RG: When I saw she was a natural show dog. She had unusual behavior for a Scottie. She learned to play on her own without me touching her. She also had correct conformation and breed type. After talking to Bob Bartos, I learned and realized that the worst thing to do was to intervene. You have to let them think it’s all their idea. Mr. Bartos explained these things to me.

11) After realizing how special this dog was, how did you keep him winning every time?

BB: He has always been shown in excellent condition on a loose leash. As Scottie, he knew how he wanted to be shown. He loved the ring and the attention. The noise and the crowd didn’t bother him. Bingo loved the camera and she loved it.

CR: It takes a lot of work on a Terrier to keep it going after the show and most people don’t realize how much work there is. It’s all manual labor and the clippers are only used on their bellies. I think Baron was a natural show dog. He seemed to like the ring. This is something that is difficult to put into a dog if he does not have in mind to be a show dog.

RG: Every show was a game and a good time. If she had a bad day, I never pushed her to do anything she didn’t want to do. He was a perfect show dog. She and I are best friends.

12) How do you think this dog represents his breed standard?

BB: He was the epitome of the breed standard both physically and mentally.

CR: I thought Baron was as close to the Lakeland breed standard as possible. He was a wonderful size. His parts fit perfectly. His guy was good but people weren’t used to seeing red Lakelands. All the winning Lakelands before him had all been black and tan or gray and tan, mostly grays, so a red dog was strange to people.

RG: No dog is perfect. Sadie is as representative of the breed standard as any Scottie could be.

13) How long did this dog campaign before winning Westminster?