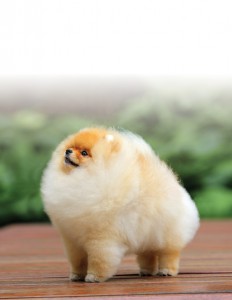 From The CC Vault: Bad Haircuts

Bad haircuts aren’t fatal, but they’re guaranteed to ruin your day. I often wonder if dogs share this sentiment when one of the neighbors suddenly appears with an antwacky summer trim. It’s the time of year that features a captivating procession of hairless Poms and Chows, fashionable Cockers and Yorkies, and the most outrageous, the Bouvier stylin’ like a giant Bichon.

I know a little about this ordeal from years of updates from my friend Brenda. She usually owns two or three crested pets, and they all go to the groomer. And after all this time, Brenda concedes that “groomers still don’t know how to trim ridges. When I had my first, Barney, I also had my Bulldog, Harley. Back then, you had never seen many bulldogs, let alone a Chinese crested in Lake Jackson, Texas. I took Barney one day to pick up Harley from the groomer. While I was waiting, this guy came to get his Poodle. It was his first time there, so he asked me if I liked the groomer. I said, ‘Hhmm… not sure. Look what they did to my dog’ and restrained Barney. His eyes widened. After a good laugh, she gave him a little introduction about hairless dogs. Brenda’s sense of humor came in handy as this experience represented 20 years of bad haircuts.

Then she tried a few big grooming establishments in Houston. Although it’s one of the biggest cities in America, full of dog lovers, that didn’t help much. The first groomer refused to touch his hairless dog. The next, “trimmed Molly to look like a Lhasa Apso.” The third time is the charm. According to Brenda, this groomer, “was awesome. But she trimmed them like Shih Tzus! What does a crested have in common with a Shih Tzu? Last year I finally found a groomer who knows how to do Chinese crests here in Chandler, Arizona. Incidentally, this one happens to be a crested breeder.

I realize that unusual breeds can present a challenge for groomers. But Chinese Crested have been recognized by the AKC since 1991. Today, they barely qualify as a rare breed. Plus, the absolute worst grooming crimes are perpetrated on wire-haired breeds, and they’ve been around for centuries. Around my neighborhood we have a few Kerry Blues, Wheatens and Scotties, but Miniature Schnauzers rule. Over the years, I got used to their soft, fluffy, faded coats and assumed their owners were okay with it. That is until one of these Schnauzer owners stopped me while I was walking my wired mini Dachshund. Obviously impressed, he wanted to know my secret to making my dog’s coat look like this.

Then I realized that something was seriously wrong with the pet grooming business. First off, I’m the worst clumsy newbie to stripping. Mind you, I’m a Chinese crested person whose first adventure in presenting mini sons was to remove all leg hair and puff up my feet to the max. Even more alarming – when did Dachshund grooming become a benchmark for Schnauzer style advice? Since then I have spoken to a few of these owners. They are convinced that coat stripping is on par with brain surgery and that a naturally water and dirt repellent coat is some kind of mythical property. There must be a reason for this widespread belief.

Despite the fact that grooming is quite an expensive aspect of routine care, most pet owners use this service, regardless of their dog’s coat type. The business has managed to survive and thrive in this tough economy and some stores can get very busy. Thus, I never disputed the statement that coat stripping was simply too complicated and time consuming to be offered as a regular service.

However, the profession has changed a lot thanks to innovative products and equipment. Many routine aspects of the job now require half the time and effort. Stores also offer an abundance of specialized services that require considerable time and skill. For example, in May, The Daily News featured groomer Jorge Bendersky, described as a famous stylist for dogs owned by P Diddy and Ralph Lauren. Bendersky’s temporary tattoos started a trend among Upper East Side dog owners. In this feature, he adorned a German Shepherd’s bum with a pair of glistening red lips, balancing the look with a bindi forehead jewel.

Made with glue, glitter and stencils, these dazzling touches cost $100 a piece. They’re supposed to last up to a month, but I don’t need to tell you about dogs. Some owners have admitted to getting a day or a week of mileage for their money. Still, business is booming, and Bendersky predicts this will be the hottest look of the summer. He’s probably right.

This epidemic of bad haircuts cannot be blamed on insufficient technical training. Today, professional groomers have access to countless courses, books, videos, websites, and trade shows to improve their skills and learn new ones. Grooming competitions have become another major motivator. They have always shown speed and technical prowess, but Creative Dog Grooming has taken it to a whole new level. The incredibly intricate process uses temporary dyes, chalks, colored lacquer, glitter, stencils, props and very deft scissors. Some of these designs can take up to 60 hours to complete. It debuted at a dog grooming expo in Chicago in 2005. In less than a decade, it has gone from special attraction to niche market to becoming one of the biggest trends to hit. the company. In 2009, its popularity spawned the National Association of Professional Creative Groomers. According to their website, their goal is to help groomers effectively use creative techniques to expand their repertoire of professional skills beyond the basics, increase business, and encourage creativity.

The organization offers many educational options, but competitions are the main focus of Creative Dog Grooming. Ron Netherland, the official photographer for Creative Grooming shows, featured one such contest for the Daily Mail last year. He called these transformations simply spectacular and his photos told the story. White stallions are the breed of choice. Over the course of two hours he took pictures as they were transformed into butterflies, camels, snails, ponies, buffaloes, peacocks and a truly amazing show chicken.

Needless to say, the article sparked a backlash from RA supporters. Their main charge was cruelty. It is difficult to agree with this assertion. Like all show dogs, these are kept in top condition. In his article, Netherland pointed out that the dogs seemed to like him. I have no trouble believing it. I have a few dogs that act like vampires seeing daylight when I pull out the grooming equipment. But most appreciate the feeling of physical well-being that comes with meticulous grooming and above all attention. Many dogs happily endure canine humiliations like little hats, booties, and silly sweaters just because they love the spotlight. In the canine world of attention-grabbing ploys, a Spiderman costume or a glittery bum tattoo is a small change.

On the other hand, there is some logic to the other predominant AR complaint. Creative Grooming intentionally distorts a dog’s natural appearance. While it’s an amazing display of grooming virtuosity, there’s no inherent integrity in turning a Standard Poodle into Captain Jack Sparrow. When you consider their grievance in this light, it becomes a bit ironic. RA proponents should admire Creative Grooming and champion a trend that literally erases breed type. But if they genuinely dispute the underlying concept, I have a question for them. Where did they go every time someone turns a Briard into a giant black Bichon or decides that a full-body Mohawk is the poodle’s summer look?

This brings me back to bad haircuts, the topic that sparked this long, convoluted rant. Creative grooming obviously requires artistic perception, imagination, dexterity, patience and immense technical skill. If groomers have expertise for this, why can’t they strip a Schnauzer, rake a shed Pom, or maintain a passable semblance of breed type when trimming a Cocker Spaniel?

According to Brenda, “The groomers just don’t listen to you. They do whatever they want and really make no effort to make the dog look like their breed. I don’t buy the argument that these dogs are just pets, so it doesn’t matter. Companion animals – rather than show dogs – provide most people with their introduction to a breed. And more than a few successful breeders got their start this way. Maybe someone is sleeping at the wheel.

Posted by Liz Powell on Aug 31, 2022. Filed under Featured, The Buzz. You can follow any responses to this entry through RSS 2.0. Comments and pings are currently closed.