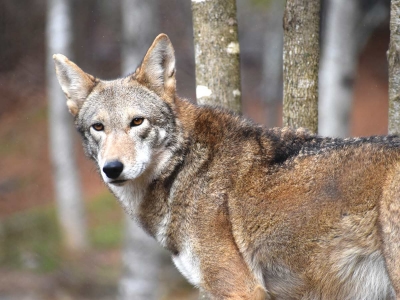 The US Fish and Wildlife Service announced last week that it would be withdrawing its 2018 red wolf project management rules , which conservation groups have called a “death sentence” for red wolves in the wild.

“The Wildlands Network and other conservation groups fought tooth and nail against the 2018 proposal, and then for three years all we heard were crickets from the USFWS,” said Ron Sutherland, Chief Scientist of the Wildlands Network. “Being able to finally put this awful and cowardly proposition to bed is super rewarding and excellent news for the future of the Red Wolves. “

A five-county region of southeastern North Carolina is the only place in the world where wild red wolves exist, the result of a reintroduction program that began in the 1990s. But in 2018, the Fish and Wildlife Service presented a plan in which it would stop managing red wolf populations on private land – meaning that outside of small areas in two of the five counties, hunters and landowners could kill endangered animals without repercussions. The plan also called for stopping reintroduction efforts, such as the release of additional wolves in the area.

Following the Fish and Wildlife Service’s announcement, the 1995 management plan will remain in effect, meaning the agency will manage the population in all five counties and continue its reintroduction and adaptive management efforts. He will also work with the North Carolina Wildlife Commission to implement coyote sterilization, including on private land when the landowner enters into a written agreement, and engage stakeholders to facilitate a more peaceful coexistence between humans and wolves.

Landowners will always have the right to slaughter wolves if necessary to protect themselves or others, or to protect pets or livestock in immediate danger.

“Based on recent court decisions involving the NC NEP and after reviewing public comments submitted in response to the proposed 2018 rule, the Service has determined that withdrawing the proposed rule is the best solution at this time,” one reads in a press release from the Fish and Wildlife Service.

The move comes after the agency endured years of legal challenges from conservation groups, including a trial introduced last November that is still active in U.S. District Court for the Eastern District of North Carolina, claiming that the agencies’ new and illegal policies prohibit the use of proven management measures to save wolves. In 2018, a federal judge presided over a separate trial ruled that the Fish and Wildlife Service’s setbacks on protecting the red wolf violated the Endangered Species Act and the National Environmental Protection Act.

However, the three-year delay in rescinding the proposal has taken its toll on the wild population of red wolves, Sutherland said. Although a few hundred red wolves still live in captivity, when the proposal was released in July 2018, around 35 wild red wolves remained, up from a peak of 150 wild wolves 10 years earlier.

“The species is on the slippery and crumbling edge of literal extinction, and it is so crucial that we now see positive conservation action from federal and state agencies to save Canis rufus,” said Sutherland.

Red wolves once roamed the entire Southeastern United States, from eastern Texas to Florida and all the way to Pennsylvania, but their numbers nearly declined as the 20th century wore on. The Fish and Wildlife Service attempted to reintroduce them to Great Smoky Mountains National Park in 1991, but that effort failed. The reintroduction effort then shifted to the eastern part of the state.