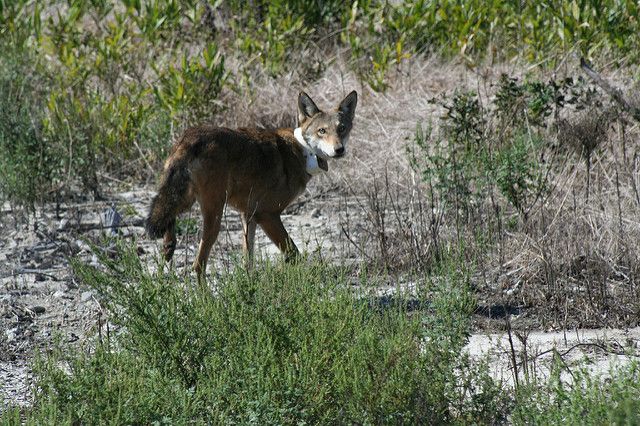 For millennia, wild red wolves have roamed much of the American Southeast. But in 1980, after centuries of overhunting and habitat loss due to human development, wolves were declared extinct in the wild. Since then, the United States Fish and Wildlife Service (FWS) has worked to reintroduce the endangered creatures to their former hunting grounds, beginning in North Carolina. But recent clashes with conservationists over the future of the program have taken the government agency to court with no clear resolution yet.

Problems with the reintroduction of red wolves date back to 1987, when the FWS began moving those born in captivity back into the wild. But while government officials reserve ranges for wolves in mid-North Carolina, wild animals often don’t respect the lines drawn on a map. Wolves soon began crossing nearby private property, harassing livestock and scaring deer away, angering landowners and hunters. Kaleigh Rogers reports for Motherboard.

As the red wolf population began to rebound, locals railed against some causing repeated problems. Meanwhile, conservationists protested as North Carolina officials allowed people to hunt coyotes in the middle of the Alligator River National Wildlife Refuge, where the wolves have designated habitat because the endangered wolves could have been mistaken for their smaller canine cousins. Darryl Fears reports for The Washington Post.

“We didn’t do some things well,” Jeff Fleming, deputy regional director of external affairs for the FWS, told Rogers. “We weren’t always as responsive as we should have been to property owners who were concerned about a red wolf on their property.”

Faced with problems on both sides, the FWS recently proposed a hard reset of the repopulation program. According to the proposed plan, the territory of the wolves would be limited to the original territory reserved for them. This means that any wolves found wandering outside would be caught and moved. At the same time, officials are reportedly considering other places in the United States to launch wolf reintroduction programs with the goal of doubling the wild population from its current 45 individuals, Fears reports.

But the plan has met stiff resistance from conservationists. “They’re trying to take them out non-lethally, but the fact is, trapping wolves can sometimes result in their death,” Jason Rylander, senior attorney for the conservation group Defenders of Wildlife, told Rogers. “There was one trapped and released in the national wildlife refuge, for example, but when you remove a wolf from its established territory, it takes time for it to find new territory. He began to exit the shelter and continually cross Highway 64. He was eventually run over by a car.

Since the proposal was announced, Defenders of Wildlife has joined several other nonprofit groups in suing FWS to stop the plan from being implemented. And so far they have had a small victory. Earlier this week, U.S. District Judge Terrence Boyle said unless FWS can prove a wild wolf endangers humans, pets, or livestock, any removal is illegal, the Associated press reports. Boyle also said it appears the FWS’s management of the program violated the Endangered Species Act by failing to provide adequate protection for endangered wolves.

“Under this decision, they will not be able to safely remove wolves from the wild,” Rylander told the PA.

But what exactly to do with the wolves remains up in the air. While relocation is out of the question as long as Boyle’s injunction stands, it could leave the wolves vulnerable to landowners and hunters who view them as pests. The Red Wolves may stay in North Carolina, but they face an uncertain future.