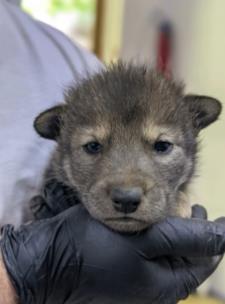 Reflection Riding announces the birth of two critically endangered Red Wolf puppies to parents, Apollo and Ruby, on April 15th. These puppies represent hope and excitement for the entire red wolf population, and they are cared for here in Chattanooga at the Reflection Riding Arboretum and Nature Center, where they were born, officials said.

This is exciting news, as there are fewer than 250 American red wolves today, very few of them in the wild.

The two puppies made their public, albeit brief, debut Tuesday morning at Reflection Riding. The window for these Cubs to be presented publicly is very limited, although more opportunities are available as they grow older and stronger over time.

The American red wolf is the most endangered canid in the world, with less than 20 alive in the wild at a single release site in northeastern North Carolina. It is the only wild site where you can find red wolves. There are 250 red wolves under human care managed at 43 facilities in the United States. Reflection Riding has been a very active member of the Red Wolf Species Survival Plan since 1996 and a staff member has served on several committees since then.

The American red wolf is a critically endangered wolf native to the southeastern United States. Once numbered in the hundreds of thousands, extermination programs and habitat loss have led to a dramatic decline and near extinction of the species. Scientists later learned how important these key species were to maintaining an entire ecosystem healthy. In the late 1970s, the last remaining wild American Red Wolves were captured in an attempt to save them. These remaining 14 American Red Wolves were placed in managed care, initiating the breeding and recovery program now known as the Red Wolf Species Survival Plan.

In 1987, four American Red Wolves were released into the wild in North Carolina, marking the first time that a canine considered extinct in the wild had ever been restored to its native territory. This population has continued to face major challenges, but with the help of the US Fish and Wildlife Service and the SSP, efforts continue to strengthen this population.

After years of increasing numbers of populations, a population decline began to occur in the middle of the first decade of the 21st century, particularly during the hunting season. Red wolves have been confused with coyotes by hunters. Today, the wild red wolf population stands at less than 20, and the population under human care hovers around 250, with the ambitious goal of increasing it to 550. Recently, four adult red wolves have been released. in the recovery area of ​​North Carolina and four puppies were crossed in a wild litter to bolster the population numbers. The recovery of the red wolf is tenuous, but with the determined efforts of the US Fish and Wildlife Service and the Red Wolf Species Survival Plan, the red wolf has strong allies.