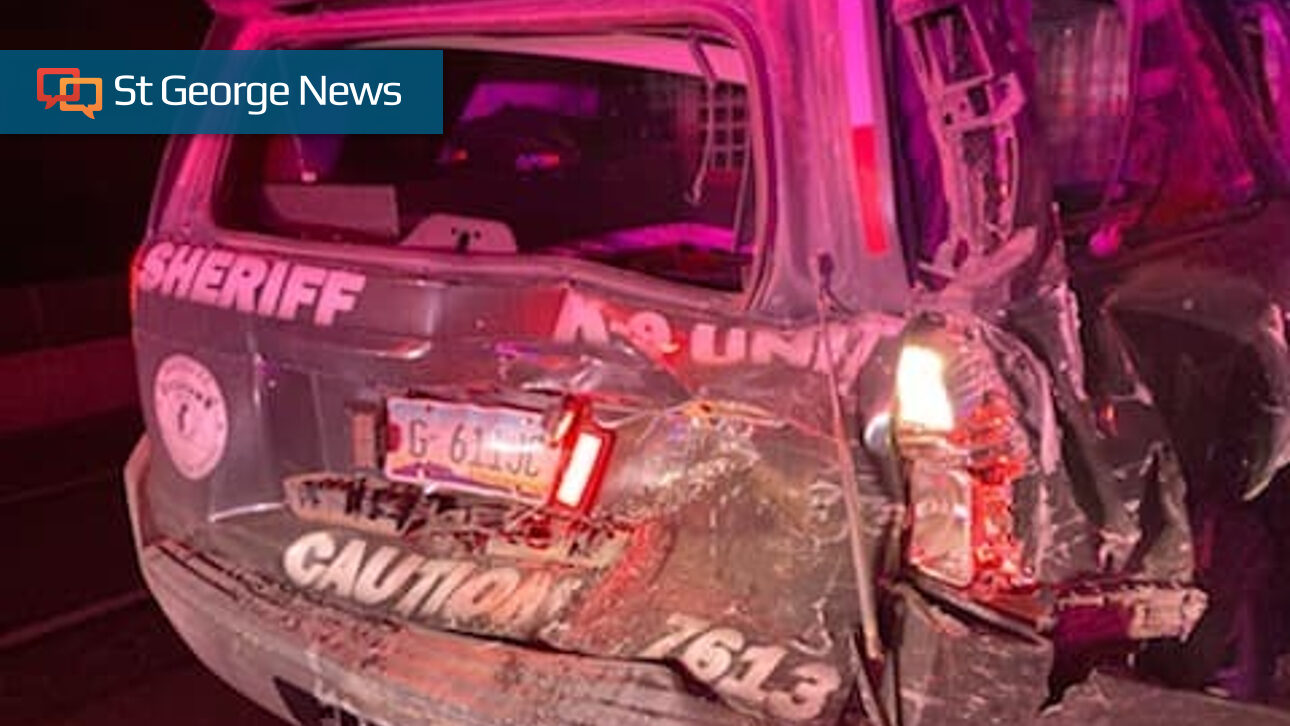 ST. GEORGE- A pickup truck crashed into a Mojave County Sherrif K-9 unit with the dog inside while parked on the south shoulder of Interstate 15 in the Virgin River Gorge on Thursday evening.

Although distressing for the dog, it was also an intense situation for his handler, who was outside the vehicle at the time but had to jump over a median to avoid his own vehicle after he was hit.

The crash injured two of the van’s occupants and each had to be transported by ambulance from the scene.

According to the Arizona Department of Transportation, the incident happened around 10:30 p.m. Thursday night and blocked the right lane of southbound I-15 for about an hour.

Anita Mortensen, spokeswoman for the Mojave County Sheriff’s Office, said the deputy pulled over to help a motorist and ended up at the scene when a white pickup truck hit the rear of the K-9 vehicle. parked. The accident left the rear of the sheriff’s vehicle and the front of the pickup truck crushed. Neither the deputy nor the K-9 officer named Brutus were injured.

“The deputy and the dog involved are fine but shaken up,” Mortensen said, although both were discharged on Friday and Brutus will follow up with his vet. “The owner knows his dog and said he needed a follow-up.”

The incident prompted a response from multiple agencies with the sheriff, including the Arizona Department of Public Safety, St. George’s Fire Department, Beaver Dam/Littlefield Fire Department, and Gold Cross Ambulance.

Two people in the van were taken by ambulance and their condition is not known. It is not known if the driver of the van was named. The Arizona Department of Public Safety did not return a request for comment.

Mortensen said it was a close call for the deputy, who was in front of his vehicle when the crash happened.

“He was able to pull away and had to climb onto a median strip to avoid injury from being hit by his own vehicle.

As for Brutus, whose past exploits have included helping detect narcotics and locating an escaped inmate in a chicken coop, Mortensen said he will be fine and will also receive top-notch care.

“Brutus is very well known in the community,” Mortensen said. “They all love him.“

Chris Reed is editor and reporter for St. George News. He gradually moved east after growing up among the Valley Girls of the San Fernando Valley in Southern California. He graduated from Cal State Northridge before spending a decade in Las Vegas. As a sportswriter and editor, he’s compared shoe sizes with Shaq before. As a journalist and editor, he covered parades, triumphs and tragedies. He also got closer to the stars by advertising for a space module builder. He came to St. George out of love and learned to love the community. He is the proud father of two boys, his youngest being a champion against autism and type 1 diabetes.