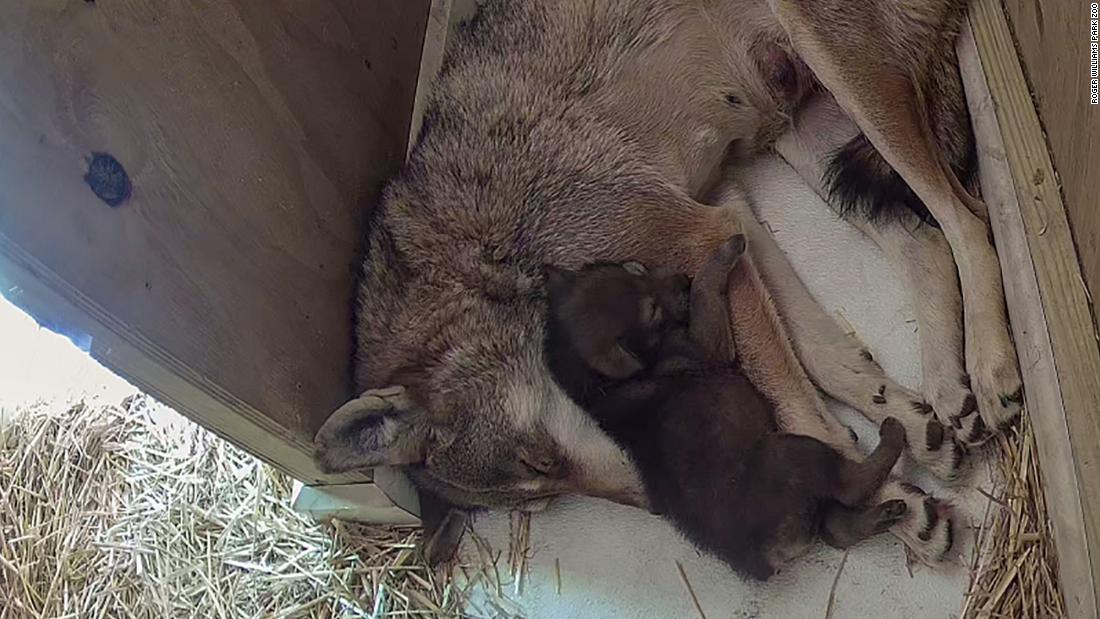 There are only about 23 red wolves left in the wild, Amy Roberts, director of animal programs at Roger Williams Park Zoo in Rhode Island, told CNN.

This makes the birth of a single cub “critical” for the survival of the species.

The unnamed pup was born May 5 to proud parents Brave and Diego, Roberts said. It is the first successful birth for Brave, 6, and Diego, 7, and the first red wolf born at the zoo since 2005.

Roberts told CNN that while red wolves normally have litters of 4 to 6 cubs at a time, smaller litters are more common for first-time mothers, like Brave.

According to Roberts, all red wolves in the United States are owned by the US Fish and Wildlife Service and managed in cooperation with the Association of Zoos and Aquariums, which accredits zoos, including the Roger Williams Park Zoo. There are about 240 red wolves in US zoos and sanctuaries, all of which participate in the red wolf‘s “Species Survival Plan” (SSP), which began in 1984.

The SSP acts as a sort of matchmaker for endangered species, taking into account “genetics and demographics” to determine which pairings of red wolves will produce the most genetically diverse offspring. Roberts explained that this pairing is especially crucial for species like the red wolf that have extremely small populations.

“Even one pup is essential because now the genes of Brave and Diego are represented in that pup,” Roberts said. “If they don’t have more litters, that little pup is even more critical. Especially when you’re talking about a small population, you want to make sure you capture everyone’s genes.”

Zoo staff are monitoring the newborn and its mother with an infrared camera in their den, but they have not yet been able to determine the sex of the pup.

“About five days ago, the baby started to emerge from the artificial den. It will walk 5 feet around the den entrance and then return,” Roberts said.

Although visitors may spot Diego in the zoo’s wolf enclosure, mother and pup will likely stay near their den for a few more weeks. depending on the zoo.

Red wolves once roamed the southeastern United States, but were declared extinct in the wild in 1980, Roberts said. The remaining 14 red wolves were brought into captivity. The collaboration between zoos and conservationists led to the creation of a stable zoological population, and in 1987 the United States Fish and Wildlife Service began reintroducing red wolves into the wild.

Wolves face major threats from humans, Roberts said, “whether deliberate or accidental.” Many wolves are run over by cars or shot. They also suffer from habitat loss and fragmentation.

There will likely “never be a large population in its historic range, which was much larger than the current range,” Roberts said. “But the goal would be to have a self-sustaining, wild-living population in the southeastern United States.”

Currently, there are only 12 known red wolves in the wild, which are labeled with orange collars to help people tell them apart from coyotes. according to the United States Fish and Wildlife Service, out of a total population estimated at around 20 to 23 individuals.

Despite efforts to restore the wild population, no known red cubs were born in the wild in 2019, 2020 or 2021, according to the Fish and Wildlife Service.

That makes captive births like the one at the Roger Williams Park Zoo all the more important, Roberts said.

“Our zoo in particular plays a very big role in the conservation of native species,” she said.

The Ford Coyote 5.0 V8 does not sound good, sorry