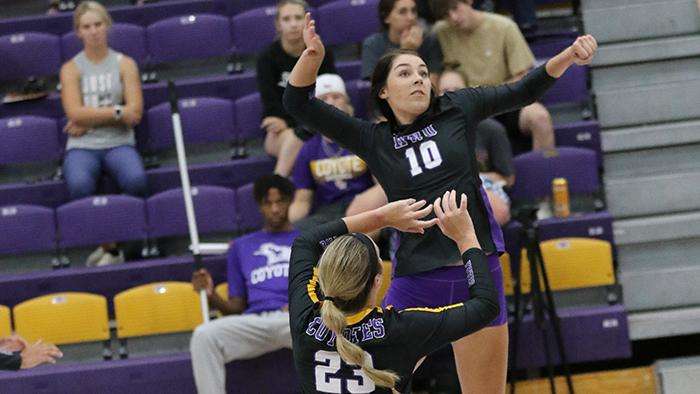 The Kansas Wesleyan Coyotes played some pretty effective volleyball in Thursday night’s home opener against the Friends Falcons in a non-conference game inside Mabee Arena.

Elizabeth Hardacre (SR/Kensington, Kan.) had another impressive game with 10 kills on 14 error-free attempts, hitting .714 for the game. Morgan Bryand (SR/Wichita, Kan.)’s 11 kills led the Coyotes, as she hit .290 for the game and rookie Rylee Serpan (FR/Spring Hill, Kan.) had nine kills and hit .500 for the game.

Wesleyan trailed 16-14 in the first set but quickly turned things around. A Bryand kill sparked a 7-0 run for the Coyotes that made it 21-16 on a Buddy miss.

Hardacre closed the set with a kill to give Wesleyan the opening set 25-18, as KWU finished it in an 11-2 run.

The Coyotes trailed or were tied with the Falcons for the majority of the second set. A kill by Hardacre tied the set at 17 all and service ace Maddy Beckett (SR/Halstead, Kan.) and a kill by Chelsea James (SR/Wichita, Kan.) gave the lead 19-17 to the Coyotes.

After a Buddy timeout, the Coyotes pushed on, extending the run to seven runs and 23-17 in the set on another Hardacre kill. A Bryand kill gave the Coyotes the set point, but Friends scored the next three before Beckett ended the set with a kill.

The third set was tight again to start, as Friends tied it at 11 on straight aces, but a kill from Bryand turned the tide as the Coyotes scored the next five to take a 16-11 lead. .

It was 18-13 in favor of the Coyotes when KWU would follow up on another 7-0 run to close the game, with the final two runs coming on blocks from Hardacre and a block assisted by Serpan and Hardacre.

The Coyotes enjoy a brief break over the weekend before heading to Ottawa for a triangle Tuesday with the Braves and Briar Cliff. KWU opens the KCAC game Sept. 16 at Sterling.