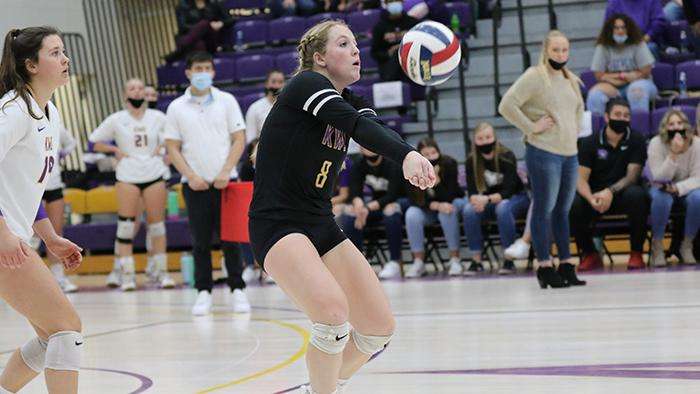 Emily Monson (SR / Cheney, Kan.) And her Kansas Wesleyan teammates were determined not to let a loss put the brakes on the Senior Night celebration and festivities.

KWU improved to 8-3 in conference (20-8 overall) and is fourth in the standings, half a game behind Tabor in third place and one game behind Ottawa in second place. Saint Mary fell to fifth with 7-3 and 18-9 overall. The Coyotes end the regular season with a game against Bethany on Wednesday at Lindsborg.

“We have such a good mentality this year, we don’t go down, we know how to push back, we are mentally strong and we train (fall behind) every day in practice, we don’t mind when we do, said Monson, the team libero and one of five seniors who were recognized in a pre-game ceremony with Ryann Kats (SR / Prairie View, Kan.), Mackenzie Pease (SR / Manhattan, Kan.), Haylie Rodriguez (SR / Salina, Kan.) And Samantha Rossin.

The Coyotes also showed their resilience after losing the first set. Trailing 22-21 in the second set, KWU scored the last four points, two on kills from Morgan Bryand (JR / Wichita, Kan.), Who had 14 kills for the game.

The third set consisted entirely of Coyotes. Leading 4-3, they took control with an 11-3 flurry and never looked back.

Trailing 20-14 in the fourth set, a serve error from Saint Mary started the comeback and KWU scored five more with Josie Deckinger (SO / Wichita, Kan.) On serve to tie her at 20. USM took a 21-20 lead but Bryand hammered two more kills and a ball handling error gave the Coyotes a 24-21 advantage.

Saint Mary made it interesting with two straight points to be in the 24-23, but a Beckett kill ended the set and the game.

“It feels really good,” said Monson, who had 32 digs and three assists. “We were up against some good competition so it was good for us to bounce back from that first set and play really like we know how to play.”

“I told them they knew what we had to do and that we were stronger than them,” assistant coach Kate Madsen said of the return.

While the victory over Saint Mary was significant, Monson said there was still a lot of work to be done.

“It’s a huge win and we just want to keep it on Wednesday and then in the tournament (KCAC),” she said. “I think this team can go a long way.”