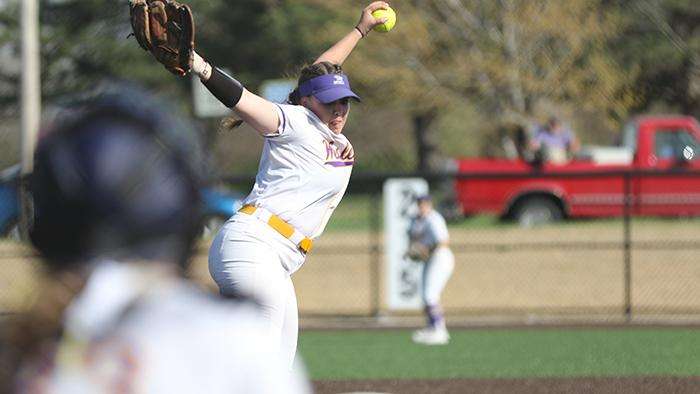 Kansas Wesleyan took on conference-leading Oklahoma Wesleyan on Saturday in the final home doubles game for the Coyotes this season at Salina South High School. The Coyotes swept the doubleheader winning the first game 3-2 and the second 9-7.

The Coyotes are tied with McPherson for third in the KCAC standings, with a series to play Wednesday at Sterling.

The losses pushed Oklahoma Wesleyan into second place in the conference, one game behind Ottawa.

The Coyotes got on the board first in the second inning of Game 1. Brianna McGinnis (SR/Tucson, Arizona) started with a walk, stole second place ahead of Carmen Angulo (SR/Long Beach, CA) and Miranda Guerrero (JR/Oxnard, CA) picked the middle to charge the pedestals. Lauren Blue (SR/Arlington, TX) led the race with a sacrifice fly.

Wesleyan struck again in the fourth. Angulo started with a single, but pinch runner Emma Schumacher (FR/Winfield, Kan.) was caught stealing. Guerrero singled and Blue doubled, giving the Coyotes two runners for Jocelyn Alcala (SO/Fullerton, Calif.) to double up both runners at home, making it 3-0.

Oklahoma Wesleyan had two runs in the top of the seventh, but Angulo closed the door with a strikeout to end the 3-2 win.

Guerrero had two of KWU’s seven hits. Alcala drove in two. Angulo was masterful in the circle again for the Coyotes, allowing two runs on seven hits while striking out nine against no walks.

The Coyotes took a 5-0 lead in Game 2 and held off a late Eagles push to complete the sweep with a 9-7 victory.

KWU scored three times in the first inning on an RBI single from McGinnis that scored Alcala, a wild pitch that allowed Mia Hernandez (FR/Hanford, Calif.) to score and an RBI knocked out by Guerrero.

Two more crossed in the second for the Coyotes after Destiny Hackney (FR/Thornton, Colo.) walked to open the inning and went third on the field of Paige Anderson (JR/Lakeville, Minn.), then scored on Alcala’s RBI double. Mia Hernandez followed with an RBI single down the middle.

OKWU took to the set third on Baylee Knorr’s single. The Coyotes fought back in the bottom half as Jewell Henry (SO/Kingston, Okla.) doubled into the left field corner and scored on Hackney’s single down the line in right field who couldn’t. be lined up by the dipping right fielder.

The Eagles got two more in the fourth, only to see the Coyotes respond again. Anderson led off with a single and Alcala doubled. Hernandez and Herrera both drove a race with a pitch.

OKWU scored three times in the top of the fifth to move within two runs at 8-6, but Angulo’s double after a Guerrero single gave up a run to give the Coyotes a 9-6 lead.

The Eagles got a run in the sixth.

The Coyotes got OKWU to go out 1-2-3 in the seventh, including a foul strikeout to end it.

Alcala had three hits to lead the Coyotes. Hernandez and McGinnis each had two hits.

Jewell Henry got the win in the circle for the Coyotes, going over four innings, allowing six runs on nine hits. Angulo came on as relief and got the save, her first of the season, allowing a run on four hits with six strikeouts in three innings.

The Coyotes end the regular season on Wednesday in pounds. The KCAC tournament will take place May 4-6 in Great Bend.

Check Out This Gorgeous Litter of Endangered Red Cubs: NPR