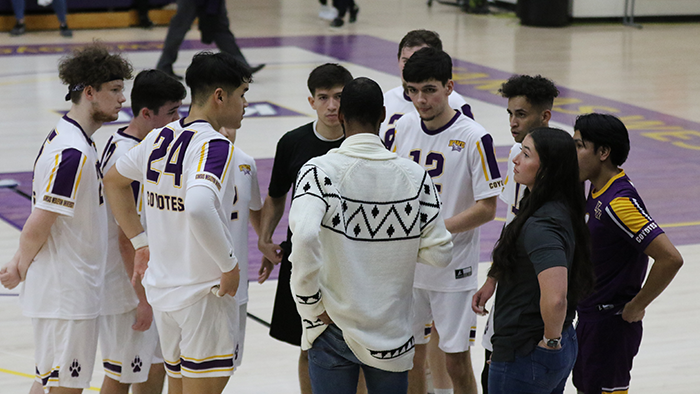 It wasn’t the result Ryan Webb wanted, but he wasn’t unhappy with the way his Kansas Wesleyans men’s volleyball team played in the program’s inaugural game.

Graceland won 3-0 (25-23, 25-17, 25-23) Friday night inside Mabee Arena. The young Coyotes were outnumbered with only nine in uniform, but they were competitive and showed their toughness.

“I have to say we got out and performed,” Webb said. “It was a great first outing for us. Once we got the nerves I thought we had executed our training plan and our game plan.

“There were mistakes here and there that we should have avoided and I think once we clean them up we can only go up from here.”

Graceland, which plays in the Heart of America conference and is also playing its season opener, had its hands full in the first and third sets. The significant Yellowjackets roster includes 13 athletes from Hawaii.

“Especially with not having our full roster, going out there and continuing to play at our level was really nice to see tonight,” Webb said.

Going into the first game, Webb was eager to see how far his team had come and what needed to be resolved going forward.

“I think it will be a good thing to focus more on training on Monday so we can really get those things out of the way to get ready for Tuesday’s game (against Ottawa at Mabee Arena),” he said.

The Yellowjackets took an 18-8 lead in the second set and took the win.

Graceland scored twice for a 24-21 lead, but KWU didn’t go easy, scoring two runs to come back to 24-23 once more before the Yellowjackets scored a match point.

KWU had a .139 hit percentage for the game and was led by all 10 kills from Victor Loya (SO/El Paso, Texas) while Christopher Perez (FR/Denver, Colorado) had seven. Colton Sessions (FR /West Palm Beach, Fla.) had 16 assists and Loya led the defense with six digs.

Graceland hit .341 save percentage and was paced by Jeremiah Taamu-Perifanos with 13 kills and Brandon Kampshoff with 12.

Webb was considering Ottawa shortly after the game.

“Freshman jitters should be gone by now,” he said.