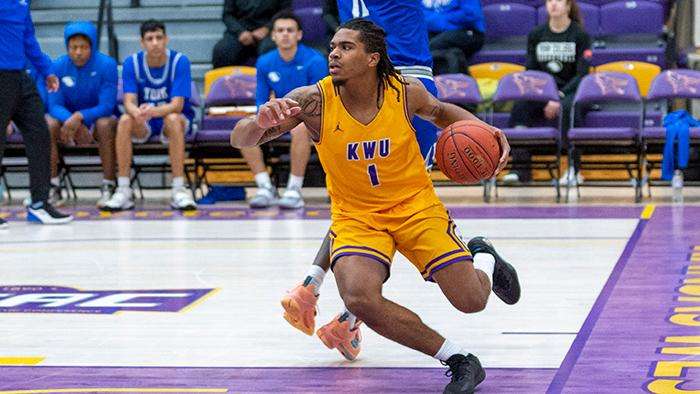 Jordan Murdock’s shirt and tie were soaked. So did his hair and beard, and water drops dotted his glasses as he walked out of the Kansas Wesleyan locker room.

It was a glorious award after winning his first game as a college basketball head coach.

“Oh man, that was awesome,” Murdock said following the Coyotes’ heartbreaking 89-86 Kansas Conference win over York on Thursday night inside Mabee Arena. “It was great to celebrate with the team – my first victory being in the role of head coach.

“I appreciate that my guys came out and just played hard tonight. It was tough, but we pulled it off.”

Murdock learned he was in charge during the first half of the women’s game when head coach Anthony Monson left after falling ill. Murdock, a former All-American at Friends and in his second season as a graduate assistant at KWU, didn’t flinch.

“Coach is preparing us at the moment, he has prepared me very well,” he said. “He makes sure I understand from different aspects. I appreciate him, it was normal for me. I just wanted the guys to come out and take the game seriously and they did.”

Murdock and Monson spoke by phone in the locker room after the game.

“I called him into the locker room after they were done spraying water on me and it was just a good time for all of us,” Murdock said. “We’ve been a little funky lately, but I think every team goes through this. We still have the whole second half of the conference round robin and it was good to get that win.”

It certainly wasn’t easy, though. York, who had won three in a row, had five quick 3-pointers and led 19-10 with just over 15 minutes left in the half.

“We definitely had to make some adjustments, those guys were making tough shots and luckily it worked our way,” Murdock said.

The Panthers went 85-83 with 24 seconds left, but Wesleyan closed it with four free throws in the final 18.6 seconds — AJ Range and Marcel Dean (SO/Tucson, Arizona) each had 2 for 2.

A key moment came with 2:31 to go in the first half. York goaltender Erik Talton, whose 16 points in 5½ minutes gave the Panthers a 50-39 lead, was sent off after picking up his second technical foul. He was 6 of 7 from the field and had made four 3-pointers before leaving.

“It was definitely a boost for us,” Murdock said.

Tyus Jeffries (SR/Oklahoma City, Okla.) led five Coyotes in double figures with 19 off the bench — 12 in the second half — on 8 of 11 shooting. He scored seven straight points in a second-half streak .

Jeffries was a starter last season but has adapted to his new role.

“The role I’m in is more defensive, it’s something nobody wants to do, so I have to step up,” he said. “The proof is in the pudding. I get saves, steals and lay-ups. That’s really all there is to it.”

Murdock said a discussion with Jeffries paid off.

“Tyus has become the best,” he said. “We had a good conversation with Tyus and he understands his role, he understands what he needs to do to stay down and he did those things tonight.”

Jeffries said Monson spoke to the team on Facetime in the locker room before the whistleblower.

“(He told us) just play the way we play, the defense is going to win the game,” he said. “Stick to what we know. We had to lock ourselves in because we were missing a piece of our puzzle.”

Jun Murdock (SO/Wichita, Kan.), Jordan’s younger brother, had 17 points and four assists after missing the Friends game with an injury. Dean had 15 points, Range 13 and eight rebounds and Hunter had 10 points and five rebounds.

The Coyotes will face McPherson at 7 p.m. Saturday at the McPherson Sports Center for their next game. The Bulldogs (12-7, 7-6 KCAC) were inactive Thursday but picked up a win after Saint Mary was forced to forfeit their game at Leavenworth due to COVID-19 concerns.