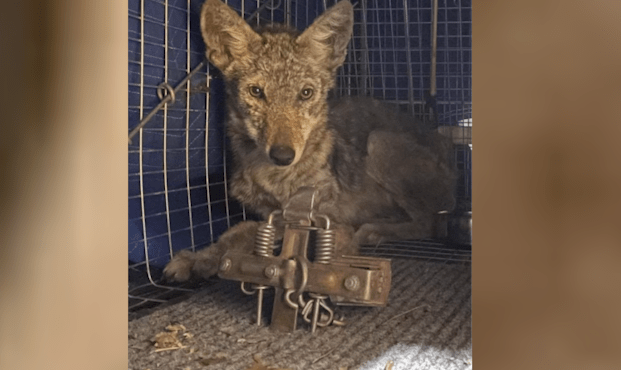 AUSTIN (KXAN) — As more people move to Austin and development continues, interactions between people and coyotes have become more common.

When Tom and Kim Hibler moved into their home in the hills of West Austin, they knew this could be a possibility.

“It’s quite fun to watch the animals cross,” Tom said.

With sightings of coyotes, they fenced off their yard and made sure their pets were locked in at night.

“We would normally see him wandering around the bottom of the canyon,” Kim said of a juvenile coyote that many neighbors had noticed in the neighborhood.

The coyote could be seen limping, and the Hiblers said they spotted something on its front leg. Upon closer inspection, they noticed a trap.

“That’s kind of what bothered me more than anything,” Tom said. “You know I’m not a big Coyote fan, but that’s why we fenced off our yard.”

After seeing the coyote several times, they called TRAPRS, a nonprofit animal rescue service that usually deals with missing dogs and cats.

After hours of tracking and setting up a cage to attract the coyote, they were able to trap the female coyote and remove the trap from her leg.

“Unfortunately his leg could not be saved,” said TRAPRS’ Amy Lewis.

It’s not the first time she’s seen traps like this, and while the people setting the traps may be trying to catch wild animals, they can also catch and injure pets.

A recent call came in to TRAPRS about a stray dog.

“She had been seen sleeping on someone’s porch just two nights before we got the call, and we ended up getting a call saying she was stuck on a trap and had been killed,” Lewis said.

It’s a concern some neighbors have about the trap found on the coyote.

Coyotes can kill or injure small pets, so you should keep your pets inside fences or inside your home, especially at night.

“We moved to a wilderness area,” Tom said. “The animals are there. If you don’t like animals, buy a condo downtown and you won’t have to worry about them.

The coyote was released into a wildlife sanctuary where these human interactions will not occur.

The Texas Department of Parks and Wildlife tells KXAN that there are no statewide restrictions for trapping on private property. You will need to obtain consent from the landowner or controlling entity of private or public land in order to take an animal. No special permits are required at the state level to set coyote traps.