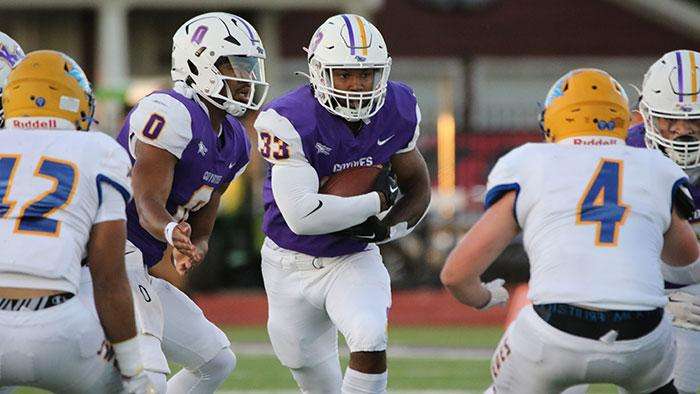 It certainly wasn’t the start Kansas Wesleyan wanted in their matchup against rival Bethany Swedes.

After a stunning 30-24 loss to Bethel a week earlier, the No. 18 KWU wanted to get out of the gate fast against a young and winless Bethany side. But a fumble into Bethany territory on the first drive of the game preceded a 72-yard drive from the Swedes that resulted in a touchdown and a 6-0 deficit after 8½ minutes of the game.

“It was definitely an eye opener for us because we came out a bit flat and we really need to step it up,” said tailback Tyler Boston (JR/Dixon, Calif.). “So after that, we really scaled things up from there.”

Indeed, they did, and Boston played a key role.

The Coyotes (3-1) scored on their next possession and never looked back in a 49-6 Kansas Conference win Saturday night at JRI Stadium at the Graves Family Sports Complex. It was their eighth straight win over Bethany and 10th in 11 games.

Defensively, the Coyotes held the Swedes to under-2 rushing yards and 202 total yards.

Boston said the loss to Bethel was heartbreaking – the Threshers scored the game-winning touchdown with 27 seconds left.

“It hit right in the heart, but it hit where it needed to be hit and allowed us to focus on how we need to continue the season the way we want it to,” he said. “We struggled a bit last week in the passing game and the running game, so we were just trying to bounce back and make something of ourselves.”

KWU coach Matt Myers was happy with how his team bounced back.

Wesleyan went for 68 yards in 11 plays for the game-clinching touchdown — White hitting Justin Clutterbuck with a 3-yard pass with 2:52 left in the first quarter.

White then ran 8 yards for a touchdown on the third play of the second quarter and KWU led 14-6. White threw a 16-yard pass to Hazuga with 8:56 left in the half for a 21-6 lead and it stayed that way until intermission.

Nick Allsman (SO/Belleville, Kan.) rushed 8 yards for a touchdown with 8:59 left in the third quarter and Mark Benjamin (SO/Houston, Texas) rushed 33 yards for a 5:40 left in the the same quarter, giving the Coyotes a 35-6 lead they took in the fourth quarter.

KWU added two touchdowns in the fourth quarter – a 30-yard pass from White to Hazuga and a 12-yard run from D’Heaven Domena (FR/Charlotte, NC) with 4:43 left.

Boston, a native of Dixon, Calif., ran with power and good balance that he attributes to his years as a track athlete and wrestler.

“As I come off an obstacle my toe hits or I get off balance and I have to be able to keep them going full speed,” he said.

Boston said the Coyotes are focused on themselves and their performance during the week.

Myers praised White for bouncing back from a tough outing against Bethel. He was 20 of 27 with an interception against Bethany.

“Tony is one of those guys if he goes out there and rips it with confidence he’ll be fine,” he said. “It’s our job to make sure he does that, he’s confident and feels it and delivers the ball to the pitch. When he does that and combines that with his legs, he’s very good. He’s a good player and he will continue to improve as the season progresses.”

“We didn’t give up and that’s what we wanted,” Myers said. “We fixed a few angles with our defensive front. That’s what we expect, we expect negative gains at zero yards – get the offense behind the sticks (first down). That’s when where you win football matches.”

KWU takes on Saint Mary (1-3, 1-2 KCAC) next Saturday starting at 1 p.m. at Leavenworth. The Spiers lost to Friends 38-20 on Saturday night in Wichita.

Coyote Brought Home By Massachusetts Family Thinking He Was A Lost Dog, Rehabilitated And Returned To The Wild – Fall River Reporter