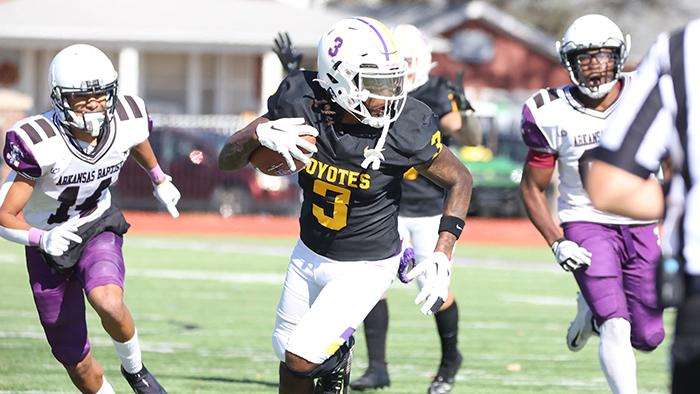 It would have been difficult, if not impossible, to script a better start for the 31 Kansas Wesleyan seniors.

Playing on a perfect fall day in front of large crowds of family, friends and fans Saturday at JRI Stadium and the Graves Family Sports Complex, the Coyotes crushed Arkansas Baptist 67-10 in the final home game for a great senior class with wild success.

“It was a really, really good day,” said running back Nick Allsman (SO/Belleville, Kan.), who rushed for 63 yards on six rushers and scored a touchdown in his final home game. “A very big senior group. A lot of us have been playing together for three or four years, so that means a lot.

“It was an emotional game for the four senior offensive line and running backs. They blocked really well and made it easy for us.”

“I’m a little nervous,” Allsman said with a smile when asked if he was worried about Hightower or Parker taking over. “They looked pretty good today when they got the ball into space. The D-line package they added there was really cool too. having fun on senior day.”

“I think they’ll be begging for it next week,” Myers said with a smile when asked if Hightower or Parker could move onto the court. “It was just fun for the seniors to let these guys go out and do a few things they don’t normally do. Jarren scored the all-time leading offensive line, so it was good to see.”

The Coyotes were in control from the start scoring touchdowns on their first four possessions. They also got a defensive touchdown when ABC quarterback Marlon Patterson couldn’t correlate an errant snap and linebacker Ricardo Garcia (JR/Reno, Nevada) recovered the loose ball and scored from the 2, which brings the score to 21-0 with 7:36 to go. in the first trimester.

Allsman scored the first touchdown of the day on a 12-yard run and Tyler Boston (JR/Dixon, Calif.) came in from 1 after that. After Garcia’s score, Mark Benjamin’s (SO/Houston, TX) 2-yard run made it 28-0 with 3:55 left in the first quarter and the Coyotes scored again on the ride. from 39 yards from Boston early in the second quarter.

“We really wanted to jump on them early and suck all the energy they might have had,” Allsman said.

Aaron Main (SR/Tulsa, Okla.) threw a 37-yard field goal, making it 59-2 with just over 10 minutes left in the game. ABC punter Fischer Ohrt threw the ball into the back of a teammate on the Buffaloes’ next possession; Reese Nebel (SR/Hesston, Kan.) grabbed the ball and was pushed out of bounds on Hightower’s first touchdown set-up that was KWU’s final points.

“A lot of different guys got to play today which is good,” Myers said. “I think we came out 100% healthy, maybe a few bumps and bruises here and there, but otherwise good enough to go into the last game of the regular season against Southwestern.”

KWU starting quarterback Richard Lara (SO/Bakersfield, Calif.) was 5 of 10 passing for 90 yards in just over a quarter of play. White and Stanton were each 3 of 5, with Stanton throwing for 67 yards and White 52. Macon caught five passes for 118 yards.

“They are monsters,” he said. “We’ve all been together since I got here, so it’s been three years now. They’re all guys who show up every day and are really, really tough.”

ABC quarterbacks Patterson and Ohrt were a total of 10 of 21 for 101 yards. Atavian Ray had a team-best 27 rushing yards on 19 carries.

The Coyotes face No. 10 Southwestern at 1 p.m. next Saturday at Winfield in the regular season finale — their NAIA playoff hopes are still dim.

“Technically it’s probably a long shot, but it’s not up to us,” Myers said. “The only thing we can do is go out there and play and see what happens.”