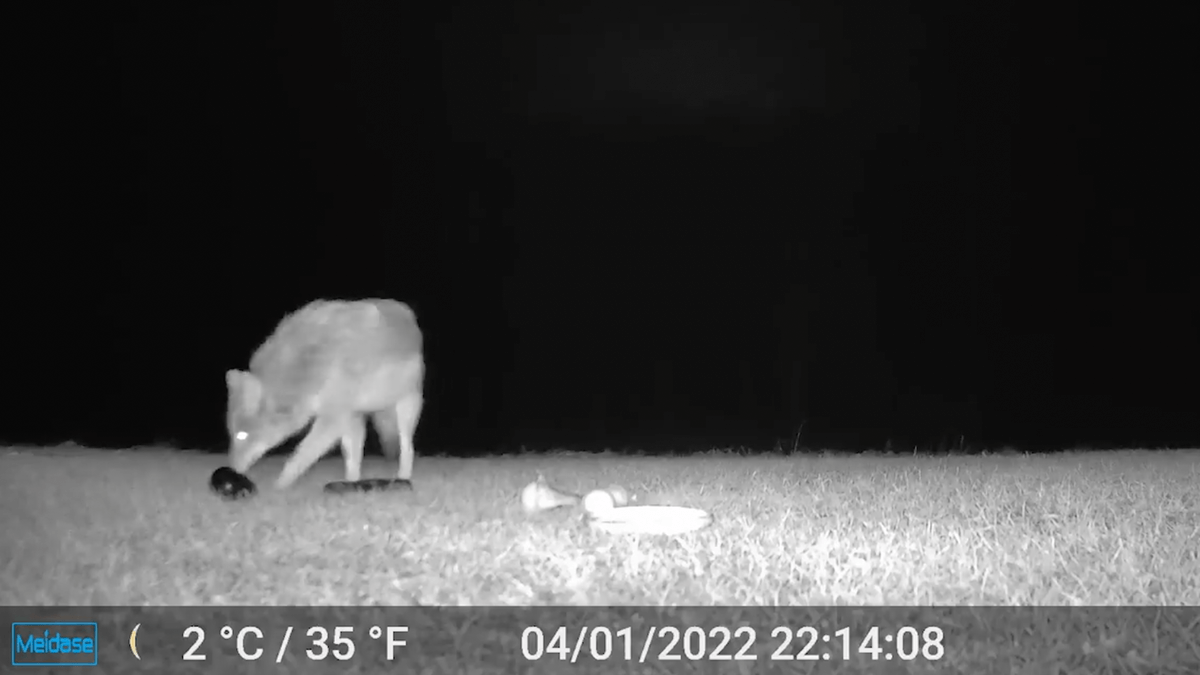 Maine coyotes are often reviled for their wild animal behavior.

Coyotes are predators and sometimes kill white-tailed deer, turkeys and other critters for food.

But that doesn’t mean they can’t have a little fun.

Today’s video, brought to us courtesy of Brian Chisholm, offers a very different view of what coyotes are doing when we’re not looking.

Chisholm came out behind his house last Friday and noticed that five of the six toys belonging to his dog, Sancho Panza, appeared to be missing. While searching, he noticed that the dog’s orange soccer ball was visible in the middle of the adjacent field.

“When I came out, we found all of his toys within 10 feet of each other,” said Chisholm, who had a theory as to what was going on.

“I actually thought it was a fox that came and took it,” he said. “I live in a beautiful rural area, so it wasn’t like someone came with their dog and their dog grabbed the toys.”

Determined to find out how the objects were moved, Chisholm set a trap. He collected the toys and placed them in front of his generator, then set up his game camera overlooking the stage.

He was surprised at what he saw when he checked the footage.

“He was a nice big coyote,” Chisholm said.

Acting much like a domestic dog, the coyote picks up and begins carrying away a rubber Kong toy. After dropping it, the ‘yote snatches it from the ground and leaps up, throwing it into the air.

He sniffs the Kong, before heading back to the other toys.

Shevenell Webb, a furbearer biologist for the Maine Department of Inland Fisheries and Wildlife, said the coyote was likely attracted to toys because of their scent.

“Like dogs, coyotes and foxes are incredibly curious and can sometimes seem ‘playful,’ especially with new objects,” she said. “The Kong probably had a fair amount of odor (rubber, dog drool, and treats), which sparked the coyote’s interest in investigating further on his nighttime walk.”

Webb said such behavior is seen more often in puppies, but even adults sometimes participate.

“And, like people, each animal has a unique personality,” she said, stressing that it’s important for Mainers to see another side of coyotes.

“Coyotes don’t just eat deer, they’re a pretty cool predator that has a lot in common with man’s best friend.”

Our appreciation to Brian for sharing his neat video!

More articles from the BDN