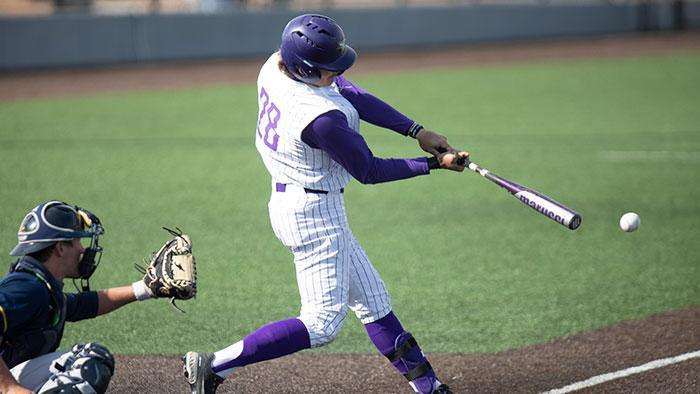 Zach Olson’s (SO/Red, Alta.) home run leading in the bottom of the eighth inning and stellar work from the bullpen propelled Kansas Wesleyan to a 3-2 win in the opener of a program Kansas Conference doubles on Senior Day Saturday afternoon at Dean Evans Stadium.

The games were the last at Evans Stadium in 2022 for the Coyotes, who are playing their final seven regular season games on the road.

Olson’s homer capped a late comeback after KWU fell 2-1 in the sixth inning. Haydn Brown (SR/Gardnerville, Nevada) walked with an out in the seventh and Dusty Sipe followed with a double to left center field that scored Brown and tied the game 2-2.

Cale Fields relieved Saint Mary starter Yanthony Navarro to start the ninth inning and Olson greeted him with a blast to left center field in the north wind. It was his fifth homer of the season and his second in two days.

Voytko also had a solid outing, pitching 5.2 innings while allowing two runs on nine hits, seven strikeouts and a walk.

The Coyotes had seven hits in Game 1 with Olson going 2-for-2 and scoring twice. Brown was on base four times with a single and three walks.

Saint Mary starter Peyton Garvin pitched a full seven innings in the last drink, limiting the Coyotes to four singles while striking out six and walking one.

The loss eclipsed a strong effort by Coyote starter Oscar Sanchez (JR/Celina, TX), who allowed one run on two hits in five innings with five strikeouts and three walks. Reliever KT Gearlds (JR/Ingram, Texas) allowed two runs on two hits two-thirds of the way in the sixth inning. Caden Diccion got the final in the sixth and Cesar Rodriguez (SO/Houston, TX) shut out the Spiers in the seventh.

Saint Mary scored her first run in the second inning on a loaded walk. The Spiers’ two runs in the sixth came on a hit, four walks and an error.

The Coyotes (25-23 overall, 13-13 KCAC) play just one game against York on Tuesday starting at 4 p.m. in York, Neb. They travel to Lindsborg for a three-game series against rival Bethany next weekend starting with just one game. at 3 p.m. Friday followed by a doubleheader at 1 p.m. Saturday.