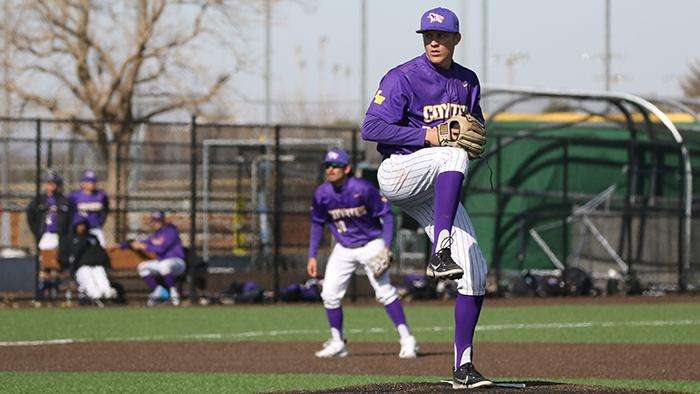 Kansas Wesleyan has a knack for scoring runs with two outs in innings so far this season. Monday’s game against the Park Pirates was no different.

It looked like the Coyotes weren’t going to score a run late in the first inning despite William Dryburgh (SR/St. Joseph, Mo.) reaching on an error to start the inning and Kevin Esquilin Cruz (JR/Trujilo Alto, Puerto Rico ) gave Wesleyan two no-outs. A double play moved Dryburgh to third but also sparked the offense.

Robbie Keener (FR/Abilene, Kan.) scored a home single in the first inning and Dustin Sipe (JR/Aztec, NM) followed with a brace on which Keener scored when Park’s receiver struggled to manage the relay from the outfield. Jarrett Gable (JR/Colleyville, TX) followed with an RBI single down the middle to give up the frame’s third inning.

The Coyotes added five more runs in the second, all with two outs. Josh Sandoval (SR/Glendale, Ariz.) and Esquilin Cruz singled, then both scored on Keener’s 2-out, 2-run double. Sipe followed with a single, and Keener scored on the play when the ball was mishandled in the outfield. Gable followed with a 2-run homer to the right.

Diego Fisher (JR/Hollister, Calif.) led third at home with a home run that sparked an 8-run rally for the Coyotes. Dryburgh was hit by a pitch and Esquilin Cruz walked. A walk to Haydn Brown (SR/Gardnerville, NV) loaded the bases and Keener would follow with a double to drive in two. After a walk to Sipe, Gable doubled in two runs. Reece Bishop (SO/Colorado Springs, Colo.) then walked to charge the bases again which was quickly cleared by Fisher’s 3-point triple.

Wesleyan capped the scoring in fourth with three points. Walks to Esquilin Cruz, Brown and Sipe charged the bases and Bishop would drive in a pair on a 2-out single and Fisher would drive in a run with a single down the middle.

Meanwhile, Spencer Foley (JR/Lancaster, Calif.) was masterful on the mound for the Coyotes. He went the distance in his first career start, holding Park to three hits, all in singles, and five strikeouts in the shutout victory.

Keener, Gable and Fisher all had three hits and drove in five runs apiece to speed up Wesleyan’s offense.

Wesleyan returns to action at Dean Evans Stadium with a weekend series with the Oklahoma Panhandle State. The series was moved to Saturday and Sunday due to forecast weather conditions on Friday. The first throw on Saturday is at 1 p.m. and Sunday at noon.