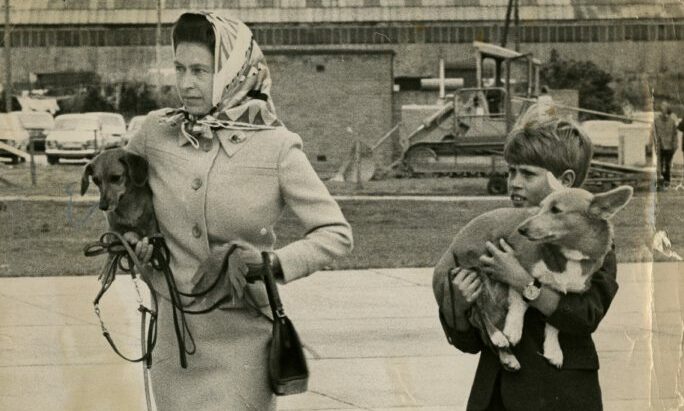 The Queen once said that “my corgis are part of the family”, so it’s no surprise that Her Majesty’s summer trips to Deeside have always been accompanied by her canine companions.

A mainstay throughout the Queen’s remarkable 70-year reign, pampered pooches were part of the crown before the Queen was on the throne.

It was her father, King George VI, who first instilled a love of dogs in the Queen, who became the first British monarch to celebrate a Platinum Jubilee.

In 1933, he brought home the family’s first pet, a Welsh Pembroke Corgi with a dark chestnut-red coat, which they named “Dookie” – a nickname for Duke.

On her 18th birthday in 1944, the Queen received her very own Corgi called Susan, who even joined the Princess on her honeymoon in Scotland in 1947 after marrying Prince Philip.

The dozens of Corgis she owned throughout her reign are believed to be descended from Susan.

In 1949, Susan came into heat while on holiday at Balmoral and was flown back south on a Royal Mail plane to meet a stud.

The match produced two puppies, Sugar and Honey, marking the start of the Queen’s dog dynasty.

Throughout her glorious reign, the Queen was personally involved in the top secret care and breeding of her beloved Corgis and Dorgis – the latter being a Corgi Daschund cross.

Buckingham Palace has never been without Corgi or Dorgi, and is believed to have owned over 30 of the loyal dogs.

The breeds were so synonymous with the royal family that two of her pets Holly and Willow – 14th generation descendants of Susan – even had starring roles in the London 2012 Olympics opening skit.

But this isn’t the first time the Queen’s hounds have tried to steal the show.

Dogs have always traveled in style and have been a familiar – and often amusing – sight to Aberdeen station and airport staff whenever the Royal Family arrives for their summer stay at Balmoral, dragged by packs of mutts.

And despite being commanded by Her Majesty the Queen, corgis are notorious for their cheeky and disobedient behavior.

In 1952 the journey to Balmoral was delayed when the dogs dropped their owners on the royal train at Aberdeen station.

And they were up to their old tricks again by making the Queen Mother disappear at Wick Airport in 1957.

It was reported that Honey was reluctantly picked up from the crowd of amused onlookers as royal aides frantically searched the trail for the runaway.

Corgis’ playful personality is said to be one of the many reasons the Queen surrounded herself with dogs.

Leading a life ruled by the Crown and her associated protocol could be lonely, and the constant companionship and affection of her pets has been very important to the Queen.

The late Prince Philip once described Corgis as “a kind of therapy” for his wife.

Although she herself waited steadfastly, her devotion to the dogs was such that she often supervised their meals and their well-being herself.

The Queen took them for their daily walks in Scotland and ensured that they always enjoyed a life of luxury.

A careful breeding program at Windsor has also ensured that the Queen always has a number of purebred Corgis in the palace.

Her purebred puppies were never allowed to be sold or entered in dog shows, although the queen offered many to her family and friends.

And in the 1960s Foxy, Tiny, Pickles, Tinker, Mask, Rufus, Cindy and Brush were welcomed into the royal household and canines were no strangers to Balmoral.

Like monarchs before her, Balmoral was a retreat for the Queen where she could enjoy country activities and relax away from the glare of the public.

The people of Deeside would often see Her Majesty driving a landy, on horseback or through the glens – and her beloved dogs would never be far behind.

In 1981, the Queen turned heads at Aberdeen Airport when she flew into the city with no less than 12 Corgis in tow destined for a summer break at Balmoral.

Eight dogs left the royal plane at a trot before the Queen emerged in the lead of a ninth, but the camera-shy dog ​​needed a gentle nudge to the rear of Her Majesty to get down the steps.

On the flight back to Aberdeen, the Corgis once again grabbed the headlines as the Queen found herself in the role of lady-in-waiting for the eager puppies.

The Queen and Princess Margaret had to stand apart at the airport and wait in the wind and rain as the royal pets were carried on the flight back to London.

In recent years, the Queen has reduced the number of her Corgis to a more manageable number, welcoming two new dogs into the family in the weeks surrounding Prince Philip’s death in 2021.

Taking inspiration from Aberdeenshire, one of the new additions was named Muick after Loch Muick on the Balmoral Estate, which is said to be one of the Queen’s favorite destinations.

And one who was sure had many happy memories for the Queen and the downtime she spent with her family and dogs at Balmoral.

These corgis will continue to be by his side during this very special year.

It’s coyote mating season. Here’s what you need to know to protect your pets