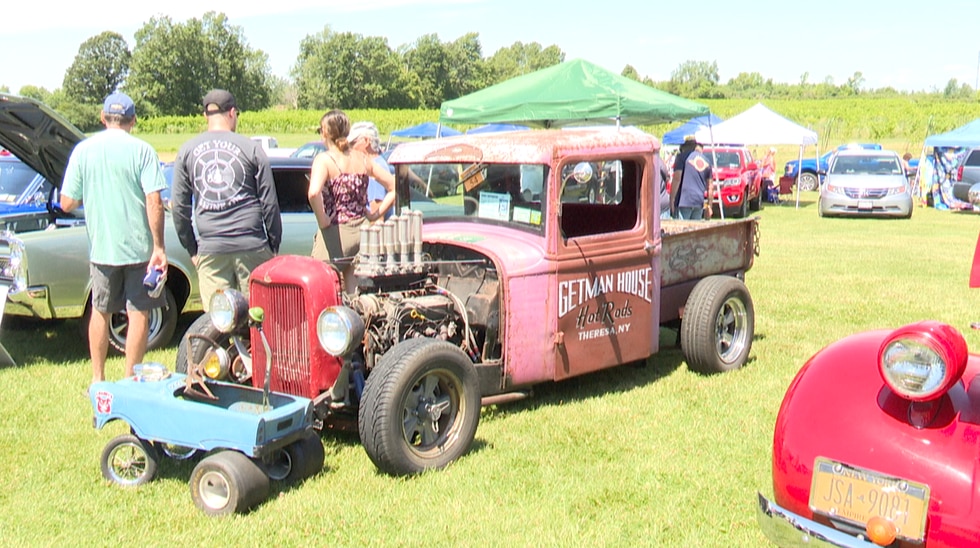 Classic cars on display at Coyote Moon on Saturday

CLAYTON, N.Y. (WWNY) — Spirits were high at Coyote Moon Vineyard on Saturday with plenty of artisans, cuisine and of course classic cars.

“It’s a great show. What’s great about the show is that you meet a lot of nice people,” said Jerry Spaziani.

In 1967 Spaziani bought a new Pontiac GTO. Since then, he and his wife have kept it in pristine condition. As the only car he ever owned, Spaziani aptly nicknamed it Sur5vor.

“The kids get into it. Sit down when their parents take a picture. They just light up. It’s the fun of going to a motor show,” Spaziani said.

Other cars in the show come from less peaceful beginnings. Meet Stude 41. In the early 90s, Benton Gill and his father came across its rusting remains in the Mojave Desert. By the end of the 90s, it had been completely restored.

“People had gone to make bullet holes there. Once we got it out it was pretty tough. Pretty much a restoration to the core,” Gill said.

Instead of restoration, some owners focused on modification. Take Gary Kriwox for example. He converted this 66 Mustang from a coupe to a fastback convertible.

All of that fun went to a good cause. A portion of the proceeds raised from the car show was donated to the Peyton Lane S. Morse Legacy Foundation. Morse was the 21-year-old Watertown firefighter who died last year after a training incident at the state fire academy in Montour Falls.

(Stacy Snyder-Morse) “It’s amazing to see the influx of support. Retired members of the City of Watertown Fire Department and their wives. It was awesome. Coyote Moon has been a wonderful family to invite us into.

Classic cars, classic wine. Everything goes to a good cause.