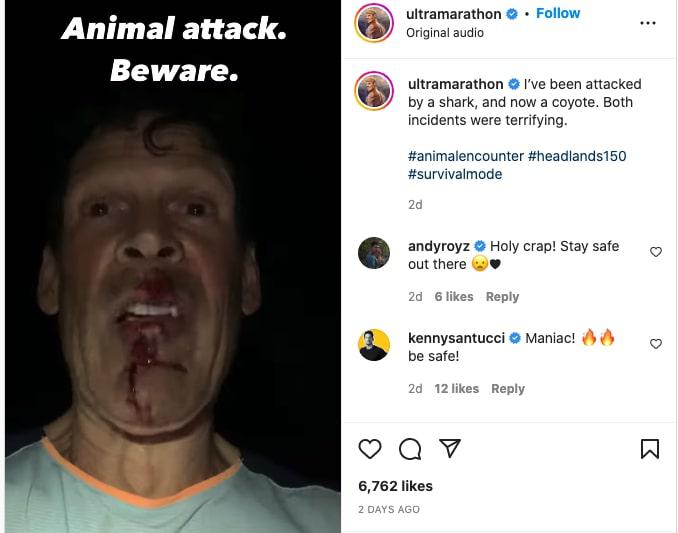 It was nearly 3 a.m. and cloudless, the moon shone over the Golden Gate Bridge, and Dean Karnazes was jogging through the Marin Headlands, having a good time on a 150-mile trail run.

That’s when the coyote attacked.

The 59-year-old ultramarathon runner from Marin County had started the Headlands endurance race last Thursday, his bag full of gels and energy bars, his clothes light and layered to withstand the windswept ridges and hot valleys . He had traveled about 40 miles and had just opened a cereal bar when he crossed paths with the wild dog on a trail leading down to the West Golden Gate parking lot.

He heard ominous and “prancing” footsteps, he said, and barely had time to turn around when a sturdy animal knocked him down, apparently attracted to the Clif bar and the food in her bag. Karnazes fell hard on his ribs and face and heard the coyote growl above him. In desperation, he waved one of the running sticks he uses to stay upright and propelled himself down steep terrain, hitting the animal and scaring it away.

“What struck me, he said, is that it was healthy. I saw hundreds of coyotes – even earlier in the day during the run – and most of them are skinny and mangy. But this one was well fed.

He later learned that this particular parking lot was known for people feeding wild coyotes, a practice that makes the animals less suspicious and more likely to approach people for food.

“The message I’m trying to get across is that we need to encourage people to stop feeding wild animals,” Karnazes said.

A National Park Service spokesperson was skeptical of Karnazes’ description of the events, in part because it would be “very, very unusual for a coyote to initiate any sort of approach or charge from a human.” . Park Service spokesman Charlie Strickfaden further noted that in 2020 the agency placed distinctively colored ear tags on several of the Marin Headlands coyotes to track and study their behavior. But they have no ear tag sightings of the alleged attack on Karnazes.

“We weren’t there, but based on his statement after the incident, we would disagree with his description of the incident,” Strickfaden wrote in an email, after speaking with the US Park Ranger who investigated the case over the weekend. “He said that coyote didn’t bite him but caused his fall.”

The early Friday morning ambush was not the first time Karnazes said he faced a dangerous beast. About 30 years ago he was bitten by a shark while spearfishing in the Florida Keys, and in other cases, he said, a camel chased him as he was running in the Sahara desert, and he once ran into a big bear while walking. a trail in the Sierra Nevada, on a 100 mile run from the Olympic Village to Auburn.

But of all those hairbrushes with the animal kingdom, the coyote attack left the most scars. Karnazes’ face is gassed, his ribs bruised and possibly broken, and his thumb black and blue from the fall.

He recorded an Instagram video shortly after it happened, still gasping for air, a trail of blood running down his chin and staining his shirt.

“A little rough,” he says in the video, staring at his cellphone camera with a bewildered and somewhat panicked expression. “I don’t know what I’m going to do. But I guess I have to keep going, otherwise it’ll probably come back for me.

And for a while he kept going – propelled partly by fear, but more strongly by a runner’s obsession with finishing the race, he later admitted.

“The stupidest thing was, I kept thinking, ‘I can finish the race,'” he recalled. “I continued to follow the course of the race. I just didn’t want to think about it, even when I felt hot stuff on my jersey. Then the sun came up, and there were hikers on the trail and…I was just covered in dirt and blood, moaning and hobbling, trying to keep my momentum going.

Around dawn, near Muir Beach, hikers persuaded him to turn back. Feeling defeated, Karnazes drove about 18 miles to his car, through the Tennessee Valley and Muir Woods, to the parking lot near Rodeo Beach, where his old black Lexus hybrid sat with a first aid kit. on the inside.

Since then, he has been recuperating at his home in Kentfield, a leafy little town on the slopes of Mount Tamalpais. He walks a mile a day to exercise his muscles and help recover from the ordeal. His ribs are stored and his face is still lacerated, “but my pride is battered at worst,” he said, “because I didn’t finish the race.”

When race results are released, those who were unable to maintain course are labeled “DNF”, for “Did Not Finish”. Committed runners have a saying, Karnazes said: “death before DNF”.

He plans to hit the track again soon.