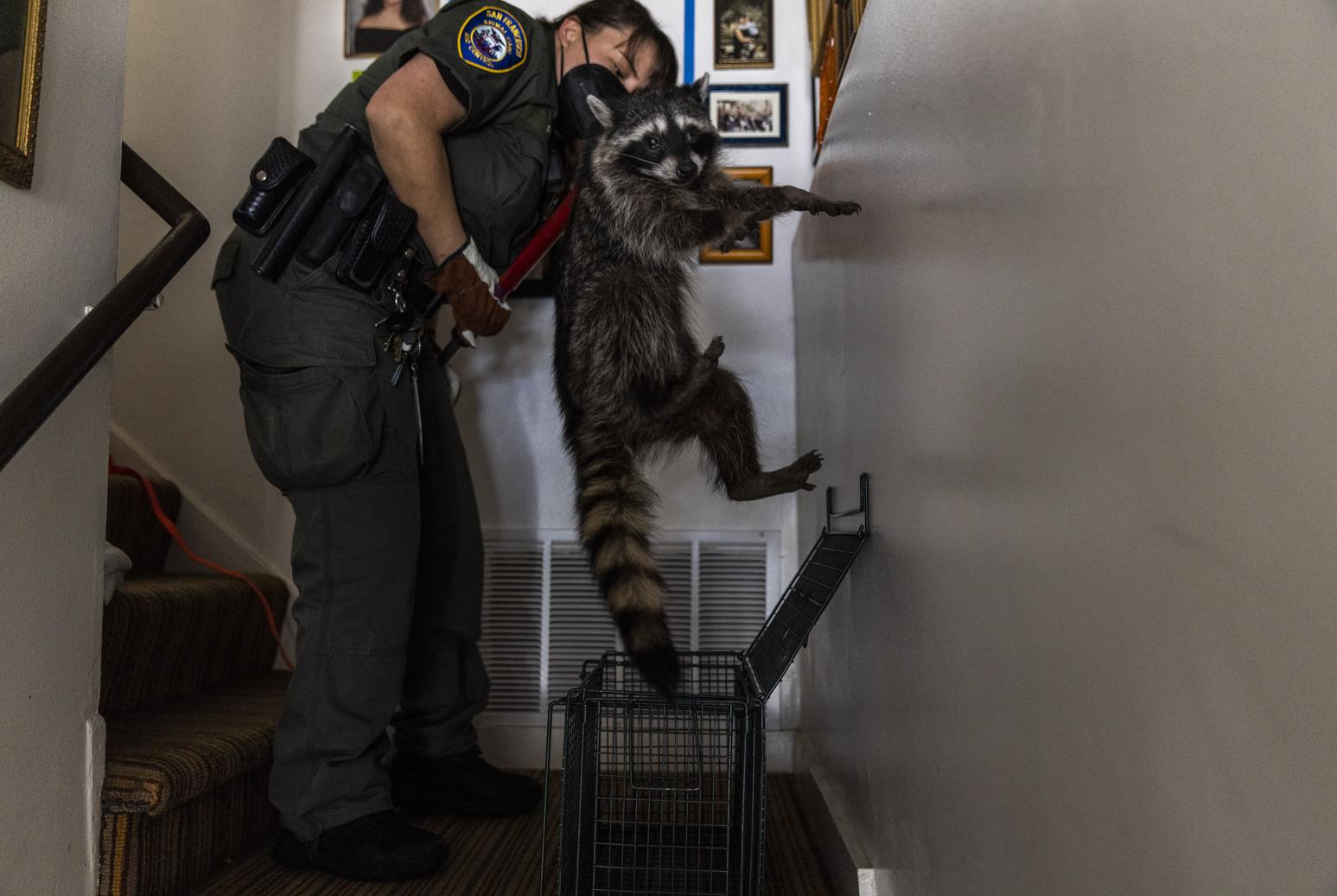 A gray fox staggered along the edge of Crissy Field Marsh in San Francisco on a recent Sunday afternoon, undeterred by passers-by and cyclists. The fox stopped on the sandy path, looked at the beach and even allowed curious passers-by to pet him.

But what may have seemed like an unusual show of docility from the fox is probably something more sinister. Bay Area wildlife experts say the fox was likely one of countless animals in the region suffering from an outbreak of what is thought to be canine distemper, a sometimes fatal viral disease which is highly contagious in some mammals. It appears to be spreading at a high rate, threatening to infect domestic dogs.

The current outbreak is not a public health concern – the virus does not affect humans – but people should be aware that it is happening, said Jonathan Young, wildlife ecologist at the Presidio Trust. Like COVID-19, he said, the effects of canine distemper can be prevented or drastically reduced with a vaccine, and experts urge dog owners to make sure their pets are up to date. on their vaccines.

Still, Young and other local experts are concerned about the unusually high number of wildlife – mostly skunks and raccoons – that appear to be falling ill with incurable neurological symptoms. The cause of the apparent outbreak remains unknown, but the spread of the virus may have been spurred by the pervasiveness of raccoons in the region, particularly in cities like San Francisco, Young said.

“It’s just an alarming situation when you see a lot of wild animals acting differently with a potential illness,” said Deb Campbell, spokesperson for San Francisco Animal Care and Control, which receives several calls a day about sick animals. in all the city. “It’s a disease that should not be taken lightly.”

Wildlife officials have yet to test the bodies of wildlife found in the Bay Area this year for the distemper virus, but local experts say symptoms seen in raccoons, skunks and sick foxes match those commonly caused by the virus. Typical symptoms include runny eyes and nose, tremors, diarrhea, lack of appetite, disorientation and walking in circles. More broadly, the virus can cause respiratory, neurological and gastrointestinal illnesses, according to the California Department of Fish and Wildlife.

In San Francisco, reports of wild animals behaving strangely began to mount early this year, raising “red flags that something is going on here,” Young said. “The evidence is piling up.”

Although canine distemper outbreaks can be somewhat cyclical, occurring every few years and then subsiding naturally, the current outbreak in the Bay Area is surprising, Campbell said. Because the disease is contagious, debilitating and incurable, hospitals and wildlife shelters must euthanize infected animals, taking care to avoid transmitting the virus to other animals in their care.

In the first two months of 2022, San Francisco Animal Care and Control received dozens of calls about sick animals, dispatching officers to capture them. By the end of February, the shelter had euthanized 29 skunks and 20 raccoons suspected of having distemper. During the same period in each of the past three years, fewer than three skunks and fewer than four raccoons have been euthanized for distemper, according to data from Animal Care and Control.

“Given that we haven’t seen (distemper) or certainly not recognized it for years…it’s clearly on the rise – it’s an epidemic,” said Juliana Sorem, veterinarian at the staff at WildCare Wildlife Hospital in San Rafael. “There’s probably some bottom level all the time, but we didn’t see levels like this all the time.”

There is speculation that the current outbreak may be caused by a new variant of the canine distemper virus; Sorem said he has noticed less common symptoms lately, such as skin infections and bad odors in sick animals. She said her team had seen signs of an outbreak in Marin County since early last year. Wildlife officials in the East Bay also reported an unusually high number of cases, Young said.

But the apparent rise in distemper cases is unlikely to turn into an epidemic among wildlife, Sorem said, mainly because wild animals don’t tend to congregate in large groups. The disease is transmitted by inhaling respiratory droplets or through contact with saliva and other bodily fluids, according to the Department of Fish and Wildlife.

An outbreak in dogs, however, could pose serious problems as they are much more likely to interact with other dogs and possibly spread the disease. Dogs that survive distemper often end up with permanent neurological damage, Sorem said.

The San Francisco SPCA animal hospitals have not had any recent referrals of pets with distemper, said Krista Maloney, spokeswoman for the nonprofit. Cats can get feline distemper, but it’s a different virus and hasn’t been reported in large numbers recently, Young said.

Dog owners should make sure their pets are vaccinated and take other precautions to keep their dogs safe, Campbell, Sorem and Young said. Owners and dog walkers should closely monitor their dogs when they are outdoors, they added, making sure the dogs do not come into contact with wild animals or drink in bowls or bodies of water that other animals may have used before. Outdoor pet feeding stations or food and water bowls could encourage wildlife to congregate or facilitate the exchange of bodily fluids.

“People should be very careful right now because nobody wants to create a superspreader situation,” Campbell said.

The apparent prevalence of the disease this year also means it has become increasingly common for people to encounter infected wild animals, even in major cities. Sometimes, as in the case of the gray fox at Crissy Field Marsh, the animals may seem friendly and people may be tempted to pet or help them. Experts warn against this.

Don’t try to feed, assist, trap or move wild animals, Campbell said, especially if they behave in unusual ways. Instead, contact the relevant authorities. In the Presidio, call the Presidio Trust Wildlife Hotline at 415-561-4148. In other parts of San Francisco, contact the Animal Care and Control emergency dispatcher at 415-554-9400.

Andy Picon is a writer for the San Francisco Chronicle. Email: andy.picon@hearst.comTwitter: @andpicon