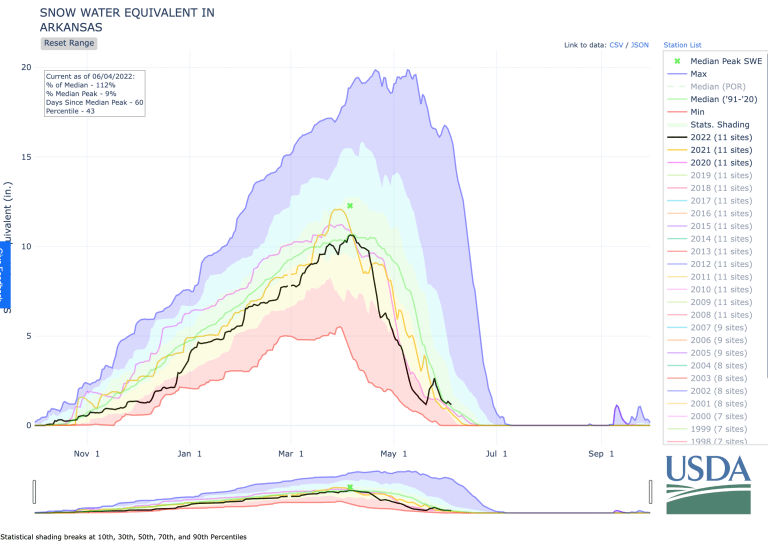 As the National Resources Conservation Service (NRCS) map shows, snowpack in the Arkansas basin was 101 percent of the median as of May 29. The Fremont Pass SNOTEL site reports 90% of the median.

May 29 reservoir data from the US Bureau of Reclamation showed 205,838 acre-feet of water stored in the Pueblo Reservoir and 63.7 percent full. Twin Lakes Reservoir is 76.8% full at 108,219 acre-feet. Turquoise Lake is currently 58.1% full with 75,227 acre-feet in storage. Data from the US Army Corps of Engineers shows that 30,014 acre-feet of water are currently stored in the John Martin Reservoir. Despite the low water levels, the Colorado Parks and Wildlife website says the eastern boat ramp at John Martin State Park is still open.

Currently, the Arkansas Basin has 14 call water rights, four of which are on the main canal – the Fort Lyon Canal (1887 priority), the Hyde Ditch (1887), the XY Irrigation Ditch (1889) and the Arkansas River compact for flows in Colorado. – Kansas state line. The oldest right of appeal is the model ditch with a priority date of 1865 on the Purgatory River. The right of the 1866 Gonzales Ditch continues to draw water from the Apishapa River. Other tributary calls include the RB Willis Ditch on Wahatoya Creek, a tributary of the Cucharas River, Pedro Gomez Reservoir and Ditches on the Huerfano River, and Tremayne #1 Ditch on Fourmile Creek. The most recent call water on tributaries of the Ark River is the Wagoner Ditch on Stout Creek with a priority date of 1880.