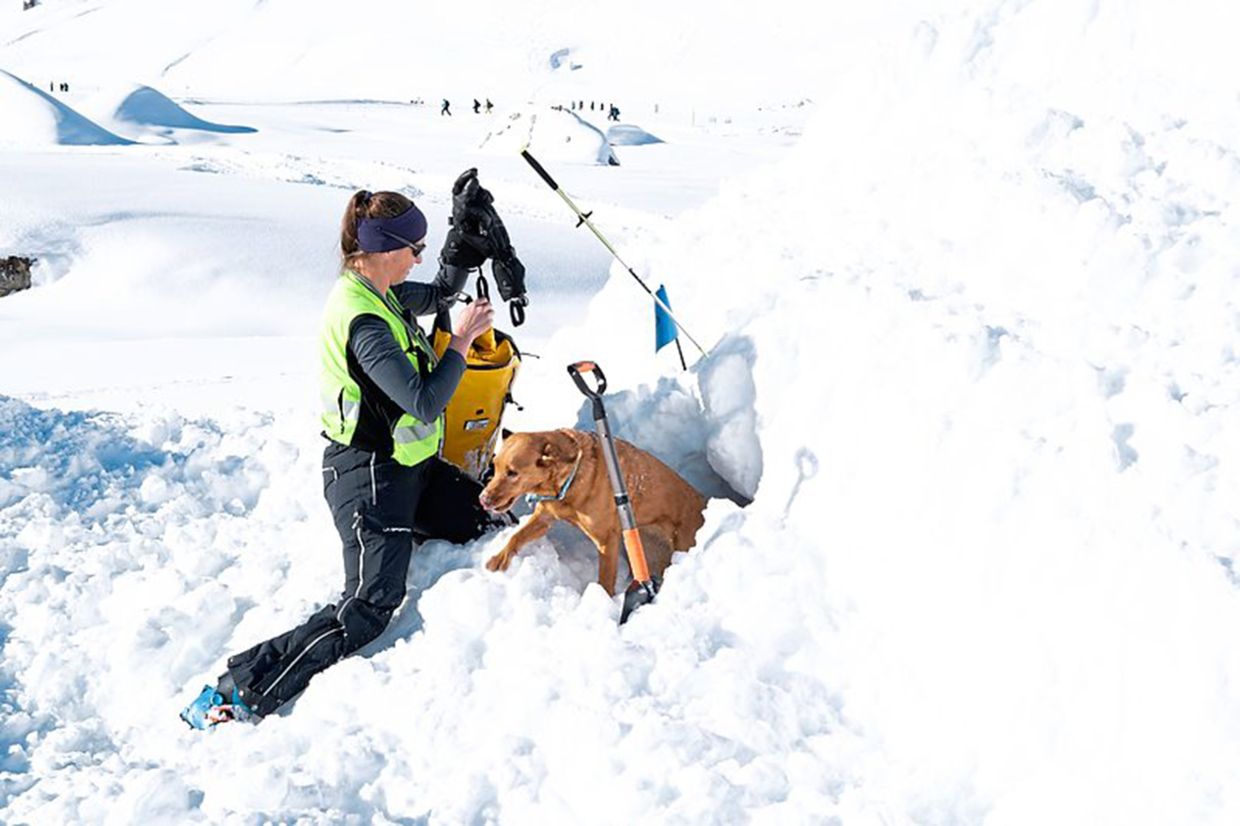 Dog Woya sits quietly next to his handler Karin Schmid, waiting for the next mission.

“There was an avalanche. Two people are missing,” says Schmid, who runs an avalanche rescue dog training course in Switzerland.

The avalanche she is talking about is just one exercise in a program to teach the canine team how to find people buried in the snow.

People die almost every year in avalanches and the Swiss Alpine Rescue is constantly ready to intervene in the event of an emergency.

Dogs play a key role in tracking the wilderness during natural disasters and other events where people have gone missing, being able to locate the lost much faster than humans, thanks to their powerful sense of smell.

But first, they have to learn how to locate climbers, skiers or snowboarders, find their gear and get their bags out.

Swiss dogs are trained at a ski resort while people ski and hang out, and only occasionally watch the canine students.

Karin Schmid, who leads the Swiss Alpine Rescue canine team, with Woya and Hope, two of the working dogs.

Hope, Zip, Eiwy, Lasko, Ria and Aru are concentrated, waiting their turn. Some are already working as avalanche rescue dogs, while others are still in training.

This is Woya’s fifth winter working on the Avalanche Rescue Team with Schmid and they have the routine in hand. Schmid gives the orders and Woya rushes over.

They go up and down, systematically traversing all the snowy space while pacing. “It’s very important that we proceed calmly and deliberately,” says Schmid.

Once Woya reaches a larger mound of snow, she begins to dig.

She checks to see if Schmid is watching, then continues scratching. Finally, she discovers another dog handler, hidden as part of the training.

“Karin and Woya did very well,” is the record. Woya receives a treat, while the next team takes their turn. Phased Learning

Dogs undergo four stages of exercise to hone their skills in finding people.

Initially, they search for the dog handler who is hidden in a mound of snow, but with the entrance left open so the dog can see where to run.

This access route to the mound is closed in the second difficulty stage, with only a small air hole left open. The dog digs its way to find the person who pretends to get lost.

Finally, only a stranger is hidden in the snow, while the dog handler sends the rescue dog to find the person and gives further orders.

It takes three years to form a rescue team, but even after that time they continue to train so that they are always ready in case of an accident where someone’s life is in danger.

“Not all dogs are suitable,” says Schmid. Rescue dogs should listen carefully to their human handlers. They must also be able to wait patiently. And they must be able to be transported by helicopter.

“And of course they must want to search in the snow. For dogs, it’s mostly a game. They do it because we then reward them with treats.

Once trained and ready to go, the human-canine team helps rescue teams search for people lost in accidents. They must act quickly in such cases. “We have to be ready within 10 minutes so the helicopter can pick us up,” Schmid says.

The Swiss Alpine Rescue team has no St-Bernard among its trainees. “They are way too big to work as rescue dogs,” says Schmid. A rescue dog ideally weighs between 15 and 45 kg. If they’re too heavy, they sink into the snow, according to Schmid. In addition, dog handlers must be able to transport the dogs, if they have to take a helicopter for example.

On the other hand, dogs that are too small won’t be able to make enough progress in deep snow, says Schmid. – dpa/Mariana Friedrich