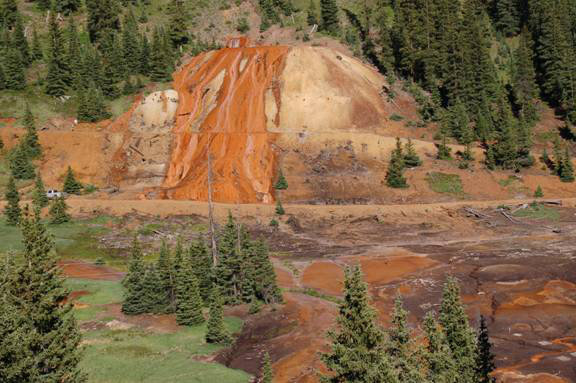 Our region is home to an abundance of abandoned mine sites and orphan oil and gas wells.

They contaminate our water and air with acid mine drainage and methane leaks. They are the legacy of decades of resource extraction and unfortunately taxpayers are often left with the responsibility to repair the damage.

The bipartisan infrastructure law passed in November includes billions of dollars for rehabilitating abandoned mines and plugging orphan oil and gas wells. But more importantly, rules are needed to avoid the creation of future problems.

Most of us are probably familiar with the abandoned mines that dot the hills above Silverton and elsewhere, but of most concern are those that drain heavy metal laden water. Our region also contains over 30,000 oil and gas well sites, and a surprising number sit idle with rusting equipment bleeding methane, a potent greenhouse gas.

Abandoned mines and orphan pits are abandoned without any responsible owner willing or financially able to rehabilitate them. These sites are not created intentionally, but invade us as the owners change over the decades and lose interest or ability to keep them going. An owner may hope that metal or oil prices will skyrocket and lead to a resurgence in extraction, but these sites have marginal reserves to begin with, and owners may eventually walk away, leaving someone other cleaner.

An important way to prevent these debts from burdening taxpayers is to require reclamation while a financially viable owner still exists. This is the basis of Colorado’s Mined Land Reclamation Act, which allows mines to “temporarily” cease production for a limited period. If production does not resume, it is in the interests of the state and the taxpayers to ensure that rehabilitation begins while someone in charge is still around.

The uranium mines scattered throughout the Dolores River Basin are a good example. Most haven’t worked for decades, but over the past 40 years owners have continued to hope that uranium prices could rise to a level that would boost production again. But at some point, reality has to set in and owners should start undertaking efforts to reclaim the mines. That’s the point of Colorado’s recovery law.

Orphan oil and gas wells are equally frustrating. A close example is the dozens of rusting, abandoned, and leaking wells west of Farmington in an area called the Hogback. State and federal records list them as active, but the rusting and the fact that it takes a high-clearance four-wheel-drive vehicle to even reach them is proof enough that the wells haven’t produced in many years. The companies associated with them are long gone, with disconnected phone numbers. If the current price of oil hasn’t spurred any renewed activity, it seems unlikely that anything will.

Colorado hopes to prevent more orphan wells by increasing the bonds filed by oil companies. Ideally, the bonds should be sufficient to cover the costs of plugging and recovering the wells in the event of the companies disappearing, so that taxpayers do not have to get away with it.

It seems logical to avoid future problems and to avoid asking for billions of dollars in tax dollars as provided for in the Infrastructure Act, but not everyone agrees. Right now, the mining industry is strenuously opposing rules on temporarily shutting down hard rock mines, arguing for loopholes that allow mines to sit idle and largely abandoned for decades, just in case. one day they would become profitable again.

The scourge of abandoned mines and orphan pits proves the value of Benjamin Franklin’s adage that an ounce of prevention is better than a cure. We can hope that state officials appropriately translate this advice into rules.

Mark Pearson is executive director of the San Juan Citizens Alliance. Contact him at mark@sanjuancitizens.org.

Hear an ITB-equipped Coyote engine rev through the octaves