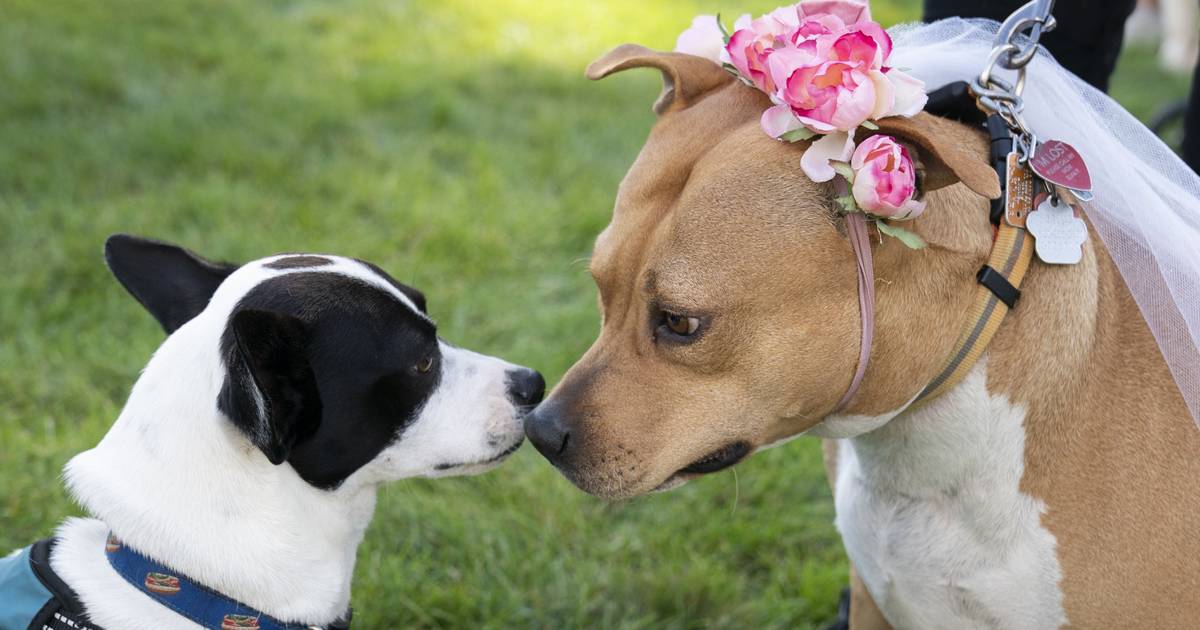 66 Dog Couples Get Married (Yes, Really) at the Cougars Ballpark for a Good Cause

A baseball field normally full of Cougars was dominated by dogs on Sunday in an attempt to break the world record for the largest canine wedding.

Rees relayed the words of an ordained canine minister, the Reverend Henry Cleotis Farnsworth III, who bonded the four-legged couples in marriage.

Pronouncing them husband and wife, Rees said, “You are now friends forever.”

“Give yourself a round of paws,” he added.

After the ceremony, there was a goat’s milk toast and the service of the doggy wedding cake.

Event organizer Leslie Allison-Seei, president of Robust Promotions and chair of the Villa Park Community FUN (Focus on Unifying Neighbors) commission, said this was the second year in a row she had tried to beat the record. Last year, she hosted a ceremony at Villa Park that brought together 80 canine couples.

“Today is strictly a day for love, romance and smiles,” she said.

If the record wasn’t quite achieved, it’s not for lack of trying – there was a dog speed dating station designed for speed dating.

The Cougars, who partnered with Robust, sponsored two dogs, placing them with local veterans.

“Our only stipulation is that they were to be called Ozzie and Annie,” Cougars owner and general manager Bob Froehlich said.

Among the couples who got married were Denver, a Golden Doodle owned by Abby Israel of Chicago, and Maddie, a husky and pitbull combination owned by Jennifer Fink of Villa Park.

Rebecca Chacon of Yorkville, owner of a pit bull mix, said she cares less about the record and more about donating to veterans in need.

“I’m not a veteran, but I have PTSD, so I understand how badly you would need a dog,” she said.