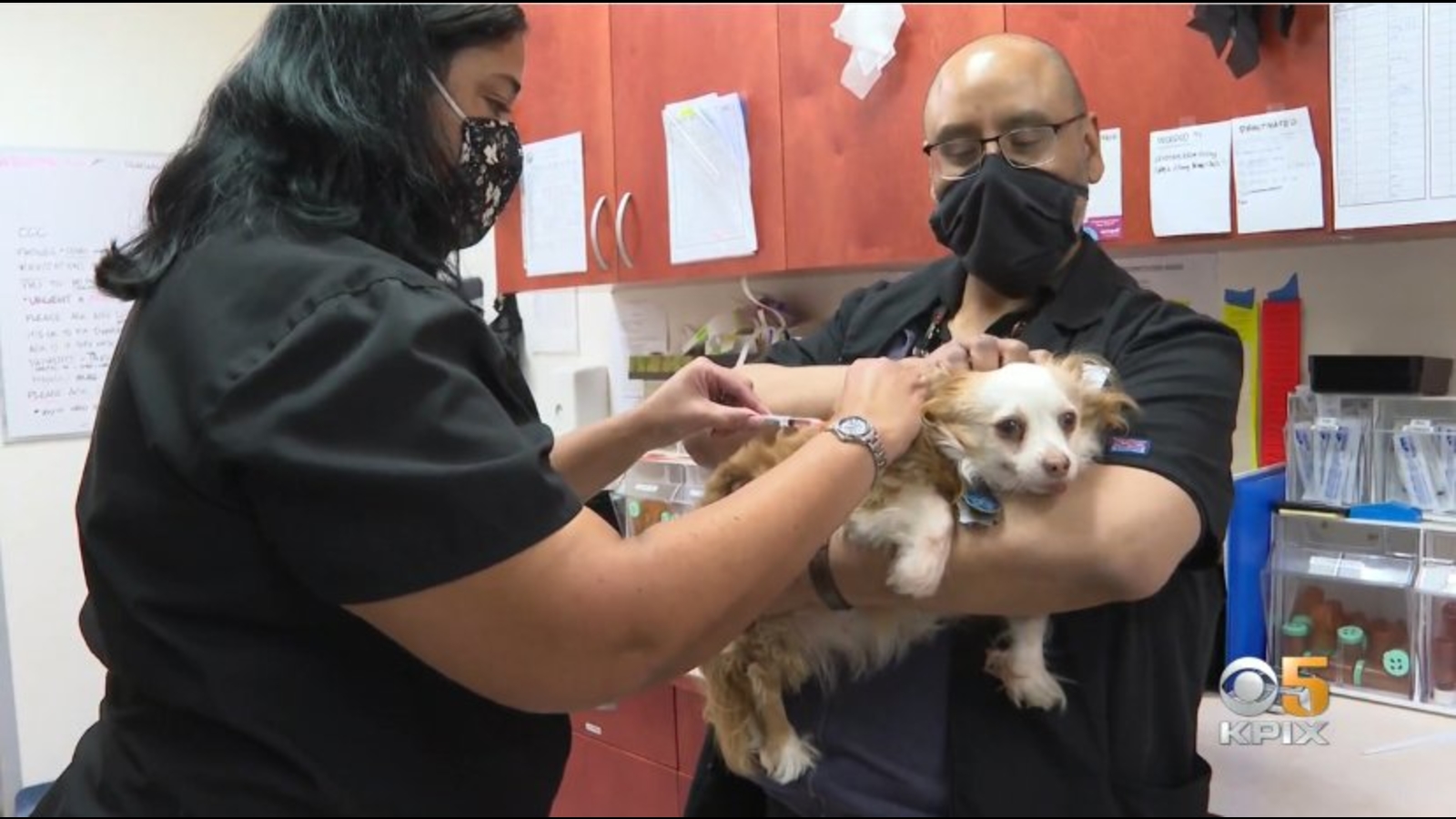 By Pamela J. Scholten On Dec 24, 2021
Share
Canine flu is now spreading rapidly in Southern California. Bay Area experts tell us it’s only a matter of time before this virus moves further north into the Bay Area.

About 800 confirmed and suspected cases are reported. Seven dogs have died so far. Canine flu is highly contagious and often misdiagnosed.

The Lacher family in Southern California almost lost their dog and wanted to share their story with KPIX 5 and Bay Area viewers.

Brian Lacher always wanted a puppy, and the pandemic was the perfect time to get one. An adorable golden retriever named Blue came into their lives.

“Blue is like a member of the family. We had him during COVID, so it was obviously a very stressful time, and I was working from home and the kids weren’t going to school. all together,” Brian explained.

When restrictions eased, the family took a short weekend and boarded Blue for a few days at a highly rated kennel on Yelp.

But when the Lachers got the 10-month-old puppy back, something was wrong. Blue was very lethargic.

“I thought he was just tired of, you know, playing with all the different dogs, he’s just a puppy,” Brian said.

Once home, Blue refused to eat or drink. When night came, the nightmare began.

“Around two in the morning we heard that Blue had this awful cough,” Brian recalled. “It looked like he was dying. It started with a cough and it turned into something like he was out of breath.”

“The pup was clearly in distress so my son wrapped him up to take him to urgent care,” Monica added.

Emergency care was overwhelmed with sick dogs. Blue was misdiagnosed with kennel cough and sent home with antibiotics. But his condition worsened further, further alarming his family.

“He was basically lifeless, couldn’t get up. He didn’t eat, drink, recognize any of us walking into the room petting him,” Brian recalled.

Her family took Blue to her own vet’s office, where they performed tests. Blue was eventually diagnosed with a strain of canine flu known as H3N2.

“I had no idea dog flu existed,” Brian explained. “I obviously knew about COVID and the dangers it posed.”

With this current outbreak, most cases are associated with dog boarding or daycare. But experts report that some dogs have been infected while on walks, at dog parks, at groomers or even at the vet.

The virus spreads when dogs come into close contact with each other.

“I would be very surprised if this didn’t happen in the Bay Area. For me, it’s just a matter of time,” said Nicolette Zarday, medical director at the San Francisco SPCA Hospital.

She told KPIX 5 that the virus can be prevented with a canine flu vaccine. It requires two initial doses, given about three weeks apart, with annual boosters.

SF SPCA pharmacy supervisor Edward Vallecillo had his two dogs vaccinated. Tempe, 11, and Kay, 10, are part of his family.

“I would be very sad and depressed if anything happened to them,” Vallecillo said.

The pandemic lockdown has delayed many dog ​​owners to get their dogs backed up, and while no vaccine is 100% effective, the more dogs vaccinated, the lower the risk for all.

“I highly recommend it even if your boarding school doesn’t recommend it,” said SF SPCA President Dr. Jennifer Scarlett.

Blue has fully recovered and Brian has this advice for all dog owners.

“It would be prudent of you to get your pet vaccinated and aware of canine flu,” the young father said.

Signs of canine flu include runny nose, cough and fever. But some dogs show no symptoms. Dogs can transmit the virus for up to 30 days.

This canine flu strain is thought to have started in birds and spread to dogs, first seen in the US in 2015. Soon after, we saw a massive push to vaccinate pets .

There is no evidence that humans get sick with canine flu. But there have been cases where cats got sick.

Shadow: Patience is the key to a successful coyote hunt | Outside